Global economic growth is likely to pick up slowly this year and next, though the recovery will be more modest than previously estimated despite the easing of trade tensions, according to the World Bank.

The expansion will accelerate marginally to 2.5 per cent this year from a 2.4 per cent pace in 2019, largely because of stabilization across a handful of large emerging economies, the lender said in its latest Global Economic Prospects report released Wednesday in Washington. The bank also warned that conditions remain fragile as it cut estimates for growth in 2019, 2020 and 2021 and lowered euro area and China estimates for this year.

“This projected recovery could be stronger if recent policy actions -- particularly those that have mitigated trade tensions -- lead to a sustained reduction in policy uncertainty,” the bank’s economists wrote. “Nevertheless, downside risks predominate, including the possibility of a re-escalation of global trade tensions, sharp downturns in major economies, and financial disruptions in emerging market and developing economies.” 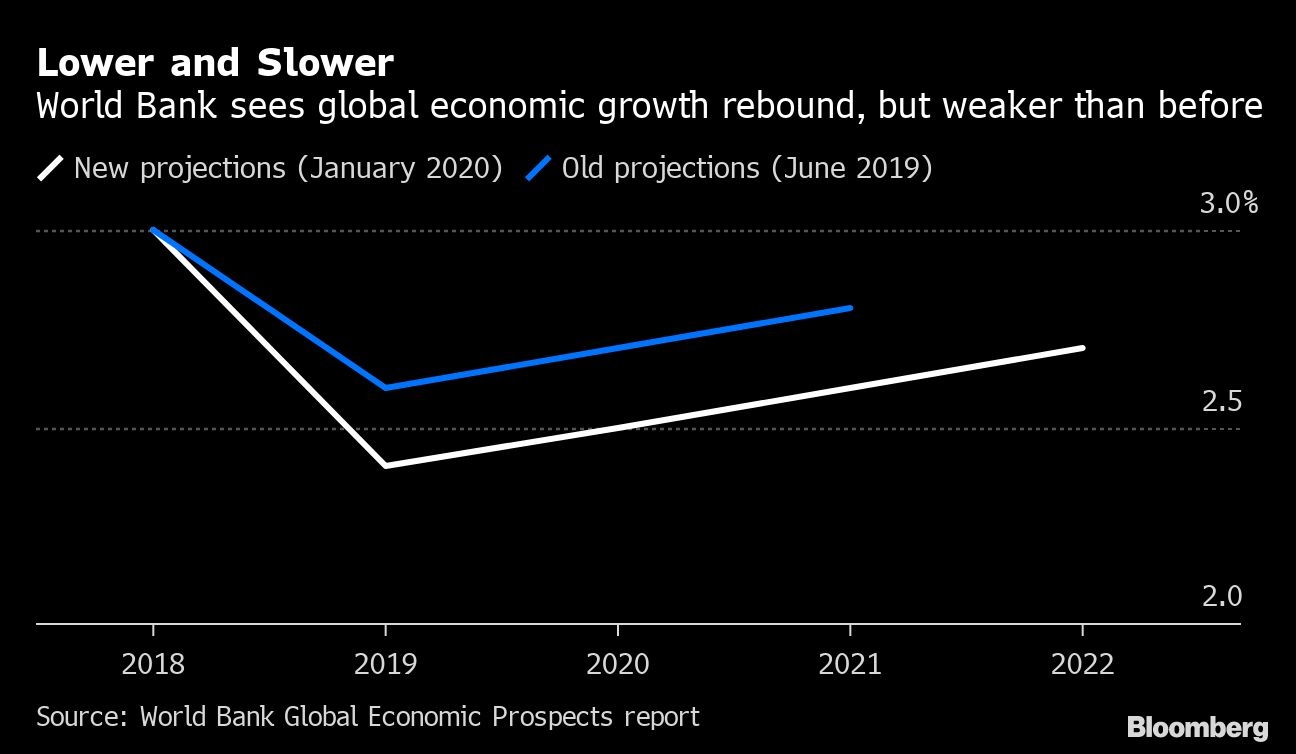 The outlook for a shaky recovery follows a year in which faltering trade and investment dealt the world its weakest growth since the global financial crisis. The bank warned that the scenario depends on much going right -- an outcome that may be less likely should tensions between the U.S. and Iran continue to flare.

While the report only reflects readings through December, the subsequent increase in geopolitical tensions could weigh on confidence and increase uncertainty, according to Ayhan Kose, director of the Prospects Group that produces the report.

“So far, the reaction has been somewhat muted, but we need to see, because these are ongoing developments,” Kose said in an interview this week. “Fragile security conditions are always an issue, and if there is a sustained increase in uncertainty, this will have an impact on confidence and that will in turn have an impact of course on investment and global activity.”

Global trade is projected to rebound after weighing on 2019. Volume growth will climb from a post-crisis low of 1.4 per cent last year to 1.9 per cent this year and 2.5 per cent in 2021, the bank said. It also warned tensions could re-escalate.

The world’s finance ministers and central bankers pledged at their last big gathering in October to use all tools, including fiscal policy, to support demand amid an uncertain outlook and elevated risks. The International Monetary Fund at the time cut its 2020 global growth estimate to 3.4 per cent from 3.5 per cent seen in July.

For the U.S., the World Bank raised 2020 and 2021 growth estimates by a 10th of a point to 1.8 per cent and 1.7 per cent respectively after 2.3 per cent forecast for 2019. More progress in trade talks with China and less trade policy uncertainty could result further boost U.S. growth, the bank said.

Most 2020 revisions, however, were downward. The bank cut Europe’s forecast by 0.4 percentage point to one per cent with the following year unchanged at 1.3 per cent. China’s was reduced to 5.9 per cent, which would be the first sub-six per cent reading since 1990, with more deceleration expected in the following two years. Japan’s 2020 estimate was unchanged at 0.7 per cent.

The forecast for a slight uptick globally was mainly because of a rebound in a few large emerging economies, most of which remain fragile as they’re coming out of recessions or sharp slowdowns. About 90 per cent of that 2020 pickup comes from just eight countries: Argentina, Brazil, India, Iran, Mexico, Russia, Saudi Arabia and Turkey.

Absent that, there would be almost no acceleration in the emerging world and, with advanced economies slowing, global growth would actually decelerate, the bank said in its semiannual report.

The Argentine economy was downgraded to a projected 1.3% contraction this year and 1.4% growth next year, though impacts of its severe financial-market turmoil will “gradually diminish over the forecast horizon.”

Elsewhere in Latin America and around the world, growing social unrest over inequality, slow growth, governance and economic policy “has the potential to disrupt activity and damage infrastructure,” and may make fiscal conditions more challenging for governments trying to ease tensions, the bank said.