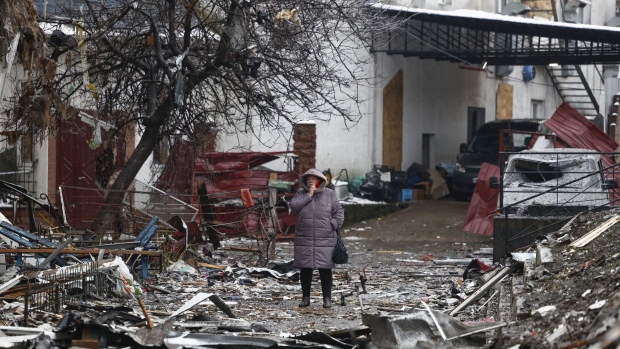 (Bloomberg) -- The world economy will be as weak next year as it was in 2009 after the financial crisis as the conflict in Ukraine risks becoming a “forever war,” the Institute of International Finance said.

Global growth is expected to slow to 1.2% in 2023, economists including Robin Brooks and Jonathan Fortun wrote in a note Thursday. When adjusted for base effects, that’s as weak as it was in 2009.

“The severity of the coming hit to global GDP depends principally on the trajectory of the war in Ukraine,” the analysts wrote. “Our base case is that fighting drags on into 2024, given that the conflict is ‘existential’ for Putin.”

The slowdown will be led by Europe, which is impacted most by the war, according to the IIF. The Eurozone economy will shrink by 2% following sharp declines in consumer and business confidence. In the US, the IIF expects gross domestic product to rise 1%, while Latin America is the “positive standout,” expanding 1.2%, as commodity exporters reap the benefits of high food and energy prices.

The single biggest driver for the global economy next year will be China, where loosening Covid restrictions are likely, according to the Washington-based IIF.

Brooks, the chief economist at the IIF, was among the first to call for the euro to reach parity with the dollar earlier this year. He also correctly predicted a rally in the Brazilian real before most, which turned him into a sensation in the country’s Twitter circles.