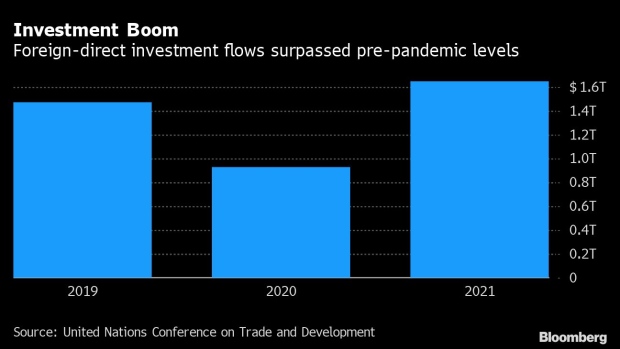 (Bloomberg) -- Global foreign-direct investment flows surpassed their pre-pandemic levels in 2021, jumping 77% to an estimated $1.65 trillion, according to the United Nations Conference on Trade and Development.

The U.S. and other developed economies saw the largest increase in foreign investment flows, which tripled to $777 billion in 2021 from the previous year, according to a report published Wednesday. Inward investment in the U.S. grew 114% to $323 billion, due to a surge in cross-border mergers and acquisitions.

Foreign-direct investment in developing economies grew by 30% to nearly $870 billion, led by a 20% jump in East and Southeast Asia and a recovery to near pre-pandemic levels in Latin America and the Caribbean.

Geneva-based Unctad said global investment flows will remain positive in 2022 but it’s unlikely that growth rates will be as pronounced as the previous year. The outlook for 2022 will hinge on vaccination rates, infrastructure investments, supply chain bottlenecks, energy prices and inflation, according to the report.