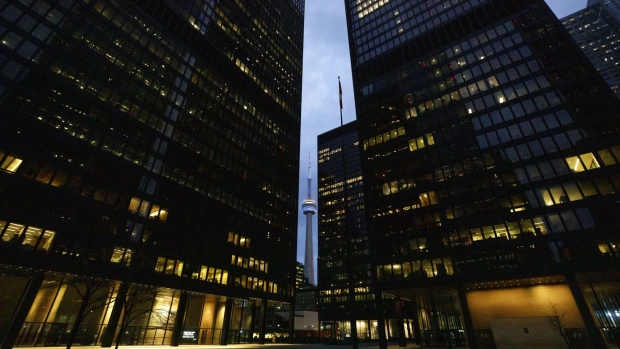 Office towers light up in the evening in the financial district of Toronto, Ontario, Canada, on Friday, May 22, 2020. Whether the PATH, a subterranean network that provides connections between major commuter stations, over 80 properties, including the headquarters of Canada's five largest banks, and 1,200 retail spots, can return to its glory days will depend initially on how quickly Bay St. firms return workers to their offices. , Bloomberg

(Bloomberg) -- Supranational institutions including the World Bank and the European Investment Bank and the largest Canadian lenders are forming a virtuous circle in the bond markets.

Multilateral institutions are raising debt in loonies at the fastest pace on record as Canadian-dollar borrowing costs are attractive once the proceeds are swapped into anchor currencies such U.S dollars. Such terms can be reached in part due to demand coming from the opposite direction, as Canadian issuers -- mostly financial institutions -- seek to convert cash raised in international debt markets into loonies.

“That certainly does help provide a natural two-way basis flow in the cross-currency market, so that is a meaningful contributor toward the inputs that are used by these issuers when comparing their cost of funding to U.S. dollars or euros,” said Sameer Rehman, a director on the government finance desk at TD Securities. “The vast majority of Canadian bank deals are used to finance their mortgage books in Canada.”

Supranational firms have issued C$4.15 billion ($3.31 billion) so far this year, the biggest amount on record for such period, according to Bloomberg compiled data, which go back to 1999. That’s also equivalent to around 40% of total issuance in loonies from such borrowers in 2021.

After Bank of Montreal priced 2.75 billion euros of covered bonds earlier Wednesday, Canadian bond issuers have raised in 2022 over $31.6 billion in transactions in all currencies except loonies, of which over $26 billion are deals by financial institutions.

The volume of these sales, which are already running at a record pace, is set to grow as National Bank of Canada is readying to issue covered bonds in euros.

Supranationals “come into Canada and swap out and banks look to the U.S. dollar and other markets and swap back,” said Brad Saunders, head of debt capital markets and syndication desk at Desjardins Securities Inc. “Canadian banks are getting ahead of the game early this year.”

International Finance Corp., a unit of the World Bank, last week sold C$500 million of five-year social bonds. The notes were quoted at around 34 basis points over the Canada government yield curve, according Bloomberg prices. That’s equivalent to a spread of around 8 basis points over the U.S. Treasury curve, which is slightly tighter than where a similar duration bond in dollars would be trading, the data show.

“The levels were at least consistent with what we could do in the dollar market,” said John Gandolfo, vice president and treasurer at IFC. “The stars aligned to be able to issue in the Canadian market. And, you know, all of the other SSA’s are looking at the same things that we’re looking at.”

The European Investment Bank also raised C$1.4 billion by tapping its 1.9% climate awareness bond due 2025, in the largest of the four deals priced by a supranational in loonies so far this year. Central banks and official institutions accounted for 73% of the deal, while investors from Asia Pacific and Europe, Middle East and Africa comprised 83%, the bank said in a Jan. 14 statement.

“Threes and fives are kind of generally the tenor where you see the vast majority of these trades, and, you know, those are the natural fit for those types of central bank accounts,” said TD’s Rehman. Canada has “one of the more hawkish central banks,” so the loonie has to outperform some of the group of 10 currencies, is a motivator for some offshore investors, he said.