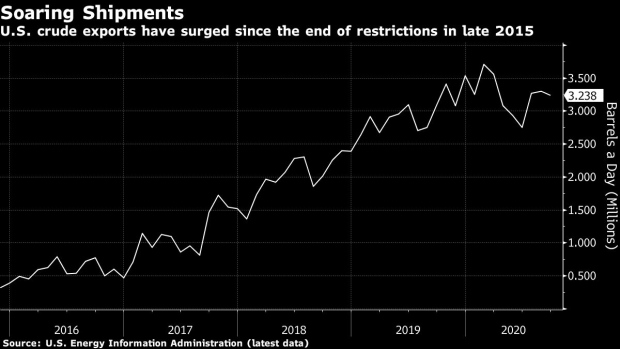 Idled drilling rigs stand past a "Midland County Line" sign in Midland, Texas, U.S, on Thursday, April 23, 2020. The price for the U.S. benchmark for crude oil, West Texas Intermediate, dropped below zero for the first time in history this month amid a global oil glut. Photographer: Matthew Busch/Bloomberg , Bloomberg

(Bloomberg) -- S&P Global Platts is considering adding a key U.S. crude grade to its North Sea benchmark, a move that could transform the way oil prices are set in many parts of the world.

The pricing agency has opened consultations on adding West Texas Intermediate Midland crude to the Dated Brent benchmark and is inviting feedback on the proposal until Feb. 5, according to a statement. Dated Brent is used to set more than two-thirds of the world’s physical oil prices and ultimately helps shape the price of Brent oil futures.

The move reflects the growing importance of U.S. crude internationally -- the country five years ago ended restrictions on oil exports imposed during the energy crises of the 1970s -- and the fact that supplies of some of the North Sea’s key grades are dwindling.

“Since the restart of U.S. crude exports in 2015, WTI Midland has become a baseload grade for European refiners and a core part of the North Sea oil market,” said Vera Blei, head of oil markets price reporting at Platts.

The U.S. exports more than 1 million barrels of the grade daily, and “its inclusion within the Dated Brent basket would provide additional volume and ensure the continued robustness of Dated Brent for the next decade and beyond,” she added. If approved, the change would affect cargoes starting in March 2022.

Europe imported about 443,000 barrels a day of WTI Midland -- a light, sweet crude -- in 2020, according to Platts. Those flows come amid falling production of key North Sea grades. The region’s loadings of Brent, Forties, Oseberg, Ekofisk and Troll crudes combined were about 1.2 million barrels a day in 2015. Since then, they have dropped by 21%, according to Bloomberg calculations.

The pricing agency has previously consulted on adding grades from outside the North Sea to Dated Brent. Last year it chose not to follow up on a proposal that included adding WTI Midland and other grades from across the world. Instead, Platts overhauled the pricing benchmark by adding cargoes delivered to the Dutch port of Rotterdam.