Few have a better watchtower over oil demand than Joe Gorder, chief executive officer of major U.S. refiner Valero Energy Corp. But this week Gorder didn’t even need his business insight to know that fuel consumption was starting to recover in America.

He only needed to look at the streets of San Antonio, the Texas city where he’s based, to see traffic emerging after weeks of lockdown.

“People are starting to get out more,” Gorder said. “I think there probably is a pent-up demand for folks to get out of their houses and get mobile.”

From the streets of San Antonio to Barcelona and Beijing, traffic data, sales at fuel stations, and pipeline flows all suggest that the slump in oil demand probably bottomed out around the middle of April, and has now started a modest — and very tentative — recovery. The signs matter beyond the petroleum industry as they provide a glimmer of hope after a torrent of negative economic data.

“I believe we have seen the bottom,” said Marco Dunand, co-founder of Mercuria Energy Group Ltd., one of the world’s top-five oil trading houses.

But the recovery is extremely slow. Oil traders believe it’s likely to take more than a year, and perhaps much longer, before global demand reaches the pre-pandemic levels of roughly 100 million barrels a day. A growing minority even speculate it may never get there again. 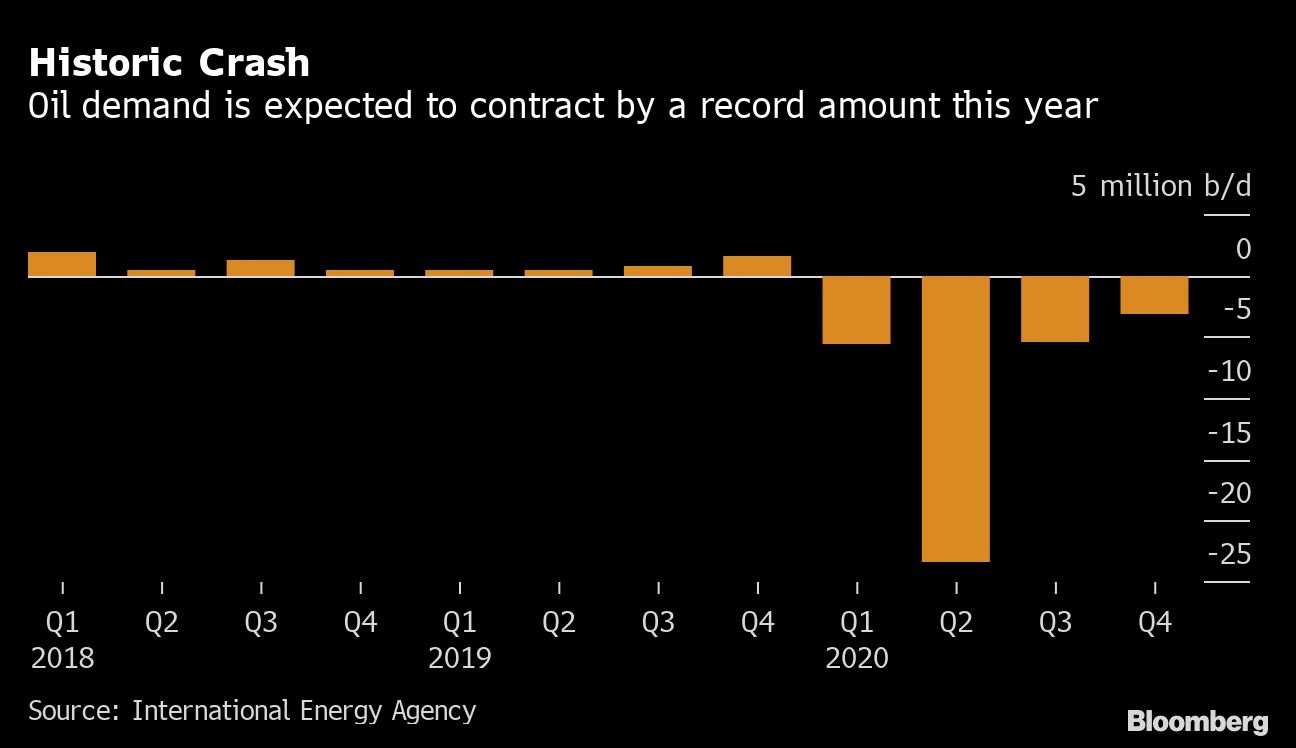 The likely shape of the revival has been a hotly contested topic. A V-shape was discarded a while ago. It’s possible it could be U-shaped, with a relatively long period along bottom, or L-shaped, with demand never returning to where it once was.

Perhaps the Latin alphabet doesn’t have a letter for the right shape. The square-root mathematical symbol may offer, to a point, an alternative: first a V-recovery as lockdowns are relaxed, followed by a long, flat tail as lifestyle changes, such as more work-from-home, become more normal.

Certainly, airlines don’t expect a return to the 2019 level of demand for years to come. It’s what Ed Morse, a veteran oil watcher at Citigroup Inc., calls “the winding, bumpy road to an oil recovery.”

“We’re seeing improvements really across all three markets, we’ve seen in May volumes trending up in Europe, we see that happening in the U.S., and we see that also in Asia,” Darren Woods, CEO of Exxon Mobil Corp., told investors on Friday. “There are some, I’d say, encouraging early signs.”

The very gradual improvement comes just as producers, from the OPEC+ alliance to drillers in Texas, accelerate their output cuts. Together they could progressively push supply and demand into balance over time. In the past week, more companies, including big American firms such as ConocoPhillips, have announced fresh production closures.

“Globally, we are at the inflection point where we are past the worst for oil demand destruction but not for supply destruction,” Olivier Jakob, managing director at consultant Petromatrix GmbH. “This should help price stabilization.”

The process will take time, with unsold crude and oil products likely to accumulate well into June and perhaps even July. Storage tanks are nearly full, and brings with it the risk of New York crude gyrating wildly again when the June futures near expiry in the middle of this month, mirroring what happened when the May contract ended and sent prices below zero.

Even so, the physical oil market, where actual barrels change hands, is showing tentative signs of recovery, particularly in Europe. Urals, Russia’s flagship export grade, has risen to a premium over Brent after Moscow cut exports to a 10-year low.

The epicentre of the oil recovery is the same as where the public health crisis started in January: Wuhan. Weekday traffic in the Chinese city has almost returned to pre-crisis levels, although it remains depressed on weekends. It’s completely back to normal during rush hour in other major cities including Beijing, Guangzhou and Shanghai, according to data from navigation company TomTom International BV. 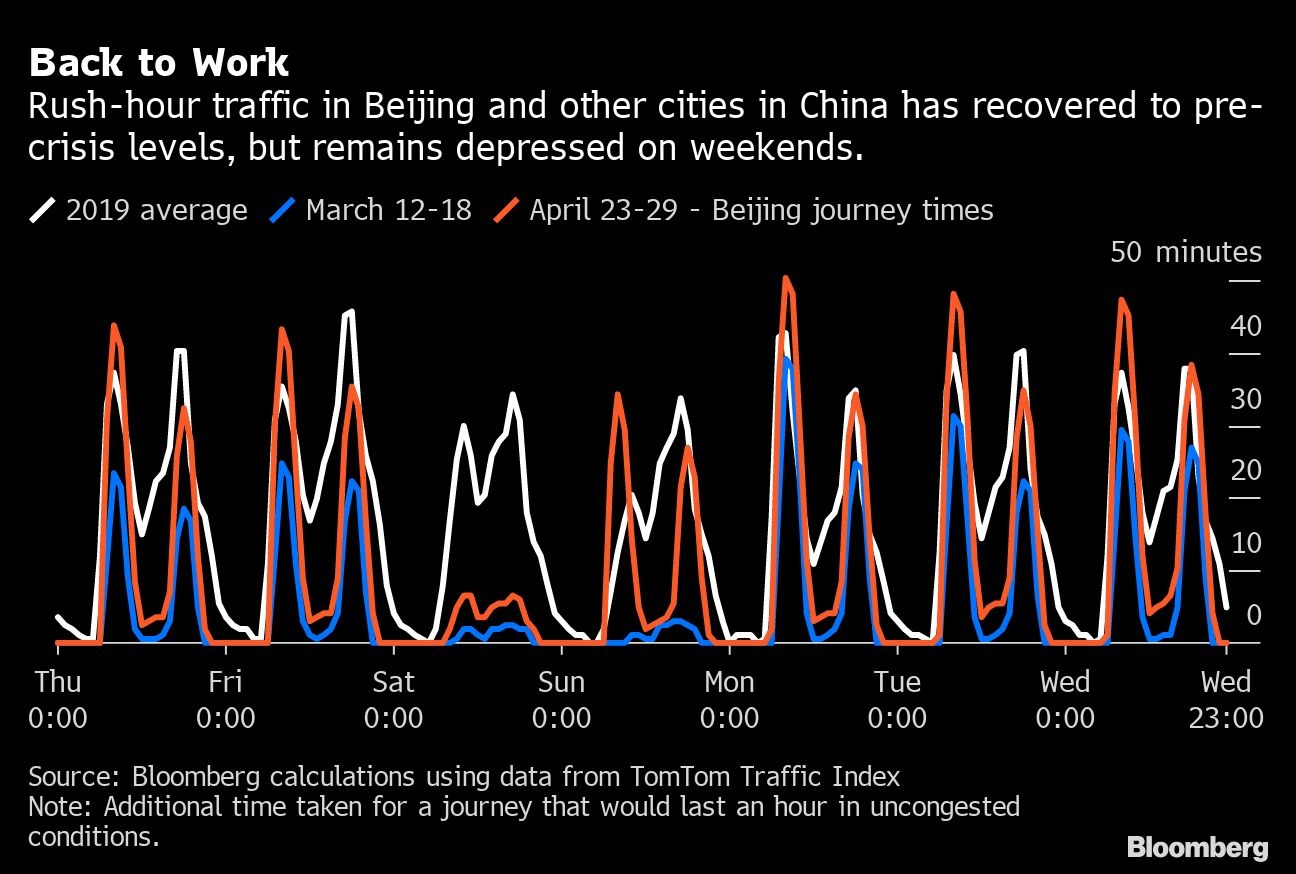 “There are a few green shoots in some places like China,” said Jessica Uhl, finance head at Royal Dutch Shell Plc. “We have some of our retail stations where demand and volume is up above pre-COVID levels.”

Some of these shoots are also visible in one of the most battered industries — aviation. Commercial operations worldwide are recovering slightly, with Flightradar24 data showing 33,500 flights taking off on April 30, the most in a month. However, that’s still two-thirds lower than from before the pandemic. Most airlines do not plan to fly again until July at the earliest.

In the oil industry itself, the recovery is patchy, and many worry that it could quickly reverse if a second wave of infections hit after lockdowns are relaxed. Diesel, which fuels trucks and industries, is holding up better than gasoline, which is doing a lot better than jet-fuel. Even when demand strengthens, crude consumption may remain low because refiners will have first to get rid of the millions of gallons of oil products that have piled up over the past weeks.

As with many economic indicators, oil demand data comes with a significant lag. So traders rely on proxy estimates for a near real-time view. One is highway traffic. Another is the amount of gasoline and diesel that’s trucked out from pipeline terminals into fuel stations.

In the U.S., the amount of gasoline supplied to the market increased last week to nearly 5.9 million barrels a day, up from 5.1 million in the first week of April but well below the typically more than nine million before the virus, according to the official data. Early last month, refiners saw gasoline demand at 55 per cent of normal level, which improved to 64 per cent in the latest seven-day average. Valero confirmed on Thursday that it’s seeing some pick-up. 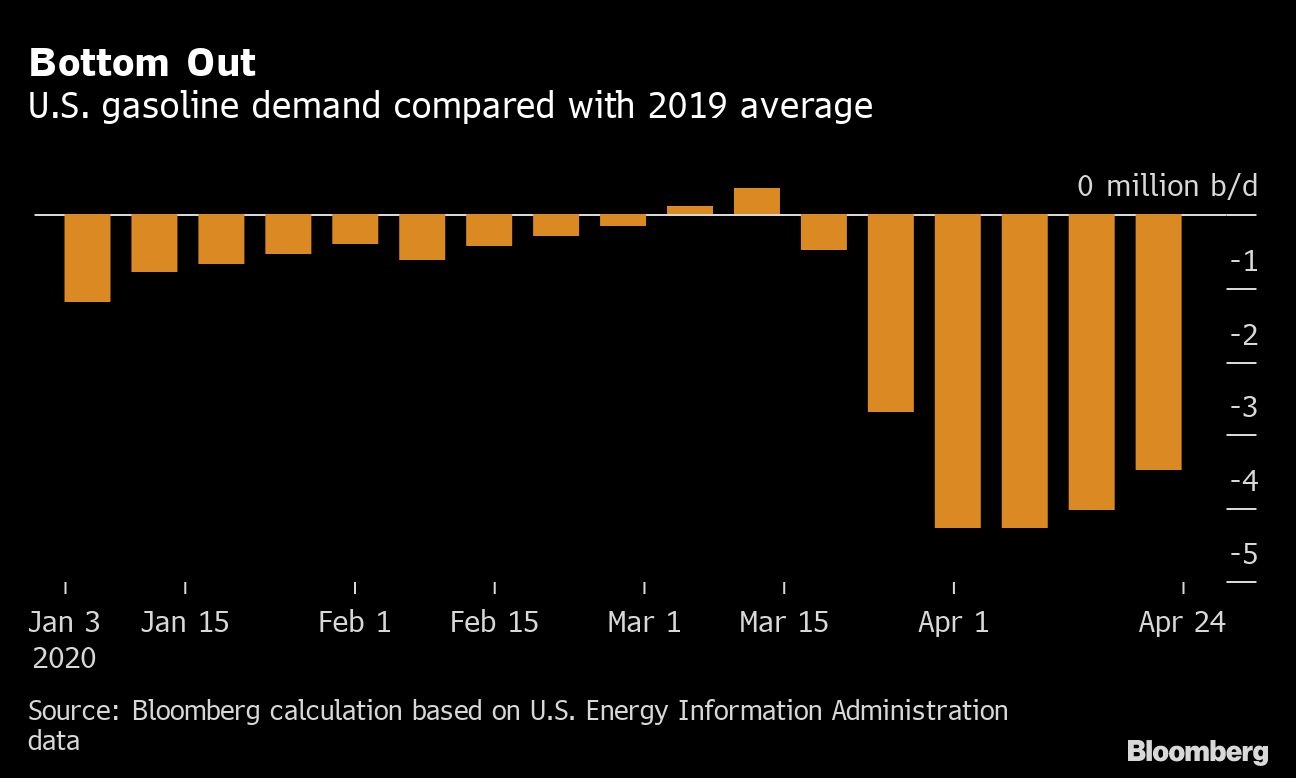 Spain, which had one of the strictest lockdowns in Europe, offers a rare window into real-time demand as the nation’s biggest pipeline operator is disclosing weekly information. CLH Group said gasoline demand in the week to April 26 was down 75 per cent from a year ago, a slight improvement from 81 per cent in mid-April and 83 per cent in late March.

In the U.K., demand for road fuels is currently down between 55 per cent and 60 per cent from levels before the crisis, compared with 65 per cent to 70 per cent two weeks ago, according to the Petrol Retailers Association.

The data show that the recovery is only marginal. But it also indicates that consumption has, at the very least, bottomed out. Where demand goes, prices follow, and Torbjorn Tornqvist, head of commodity trading giant Gunvor Group Ltd, thinks the worst of oil’s slide is over.

Echoing a widely held view in the market, Tornqvist warns, however, that these subdued prices and demand may remain for a while. Prices aren’t likely to go much above US$40 a barrel before the end of 2021, Tornqvist said. Only four months ago, at the start of this year, benchmark Brent crude was near US$70.

“It’s going to take a long time to balance the market,” he said.