Global oil demand will hit a plateau around 2030 as the use of more efficient cars and electric vehicles ends an expansion that dominated the past century, the International Energy Agency predicts.

While the current growth rate of 1 million barrels a day -- or about one per cent -- will hold for the next five years, it will ebb to just 100,000 barrels a day in the 2030s, the agency said. By that time, the use of oil-based fuels in passenger cars will have peaked, the IEA said in its long-term World Energy Outlook.

“Oil demand plateaus post-2030,” said Fatih Birol, executive director of the Paris-based agency, which advises most major economies. “Demand growth is robust to 2025, but growth slows to a crawl thereafter.”

The prospect of “peak demand” has spread in the oil industry in recent years as countries seek to avert catastrophic climate change by diversifying from fossil fuels, and as renewable-energy sources get cheaper. While the IEA sees “no definitive peak,” the stagnation it envisages will have far-reaching consequences.

The warning comes at a particularly delicate moment for Saudi Arabia, the world’s biggest oil exporter, which is selling a stake in its state-run oil company as part of its preparations for a lower-carbon world. The kingdom acknowledged the risk of peak demand in the prospectus for the initial public offering. 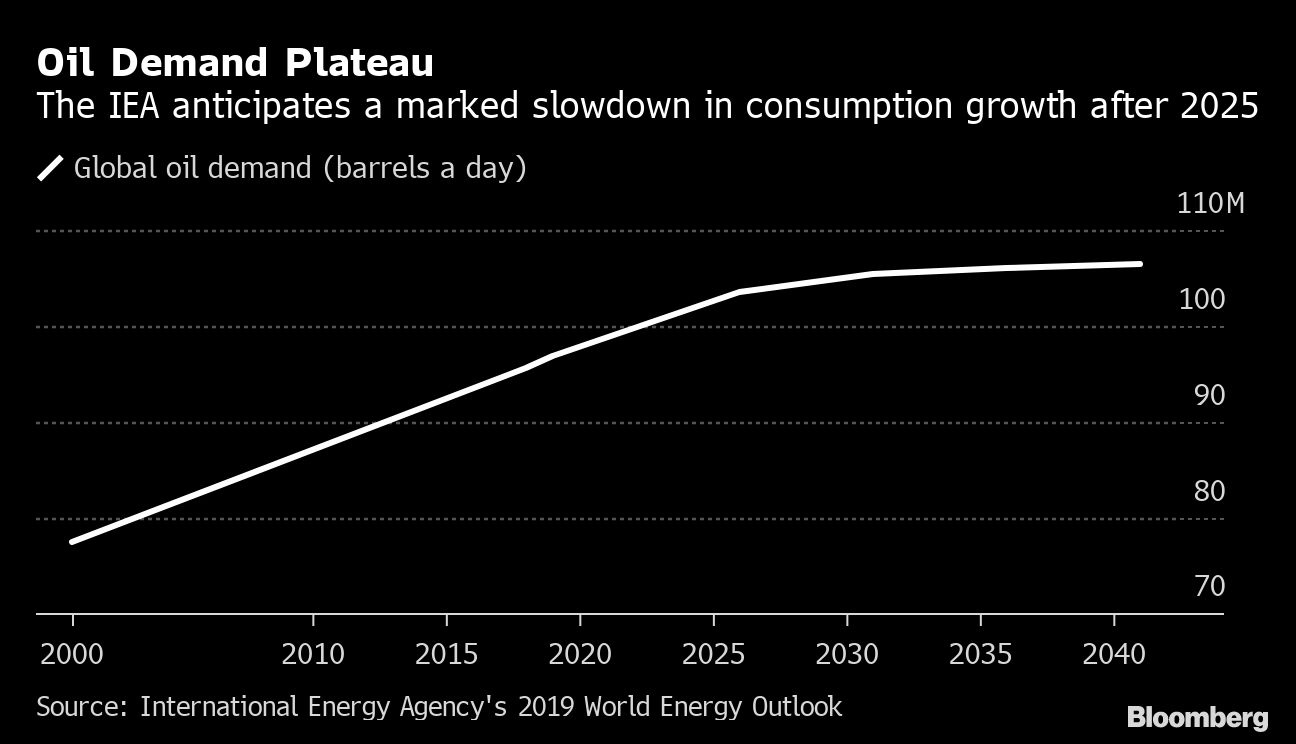 The report does offer oil producers some solace. Even as demand growth slows, depleting oil reserves will still need to be replaced. The necessity to find new supplies should cause prices to rise from current levels of about US$60 a barrel to reach US$90 in 2030 and US$103 a barrel in 2040.

The use of more fuel-efficient car engines will knock out 9 million barrels a day of demand, while the growth of electric cars will displace about 4 million a day. Yet despite the flattening of oil demand, worldwide emissions of carbon dioxide from energy will keep increasing after 2040 as developing nations continue to burn coal for power generation, according to the report.

China’s oil-demand growth, which drove the bull market that propelled crude prices to a record $147 a barrel a decade ago, “grinds to a halt in the 2030s,” the IEA said. The country’s consumption will top out at 15.7 million barrels a day.

The OPEC cartel led by Saudi Arabia, besides being buffeted by faltering demand, also faces the relentless rise of customer-turned-rival, America. The U.S. will account for 85 per cent of the growth in production worldwide to 2030 as its shale-oil boom continues, according to the IEA.

U.S. production will reach 20.9 million barrels a day in 2025, when its combined exports of crude and refined oil will overtake Saudi Arabia’s.

That will shrink the share of world markets held by the Organization of Petroleum Exporting Countries and partners like Russia. From controlling just over half of global supply now, their share will diminish to 47 per cent in 2025, the lowest since the 1980s, the IEA said. If OPEC continues restraining production to prop up prices, its output won’t exceed last year’s levels until 2030.

The OPEC+ coalition has cut production this year to prevent a surplus, and though it has vowed to do “whatever it takes” to keep markets in balance, the outlook for the years ahead is sure to test their resolve.

“The efforts to manage the oil markets did not give the result they had in mind,” Birol said. “Prices did not increase, and U.S. production continues to increase -- together with production growth from Brazil, Canada, Norway and Guyana.”