World consumption will once again reach 100 million barrels a day in the second half of 2022 as developed economies bring the virus under control, the agency said, in its first detailed outlook for the year ahead. At some point before the end of the year, demand will surpass pre-Covid levels, it said.

The forecast counters speculation that oil use -- and the resulting planet-warming emissions -- may have already peaked as a result of social changes in the wake of the pandemic. The IEA itself sees consumption reaching a plateau in the 2030s, but hasn’t predicted a peak in demand.

Oil prices have rebounded to a two-year high above US$70 a barrel as motorists take to the roads and economic activity picks up with the easing of lockdowns. The report -- which paints a slightly more bullish picture than the agency’s last outlook -- underscores that the market’s next move is in the hands of Russia and Saudi Arabia. 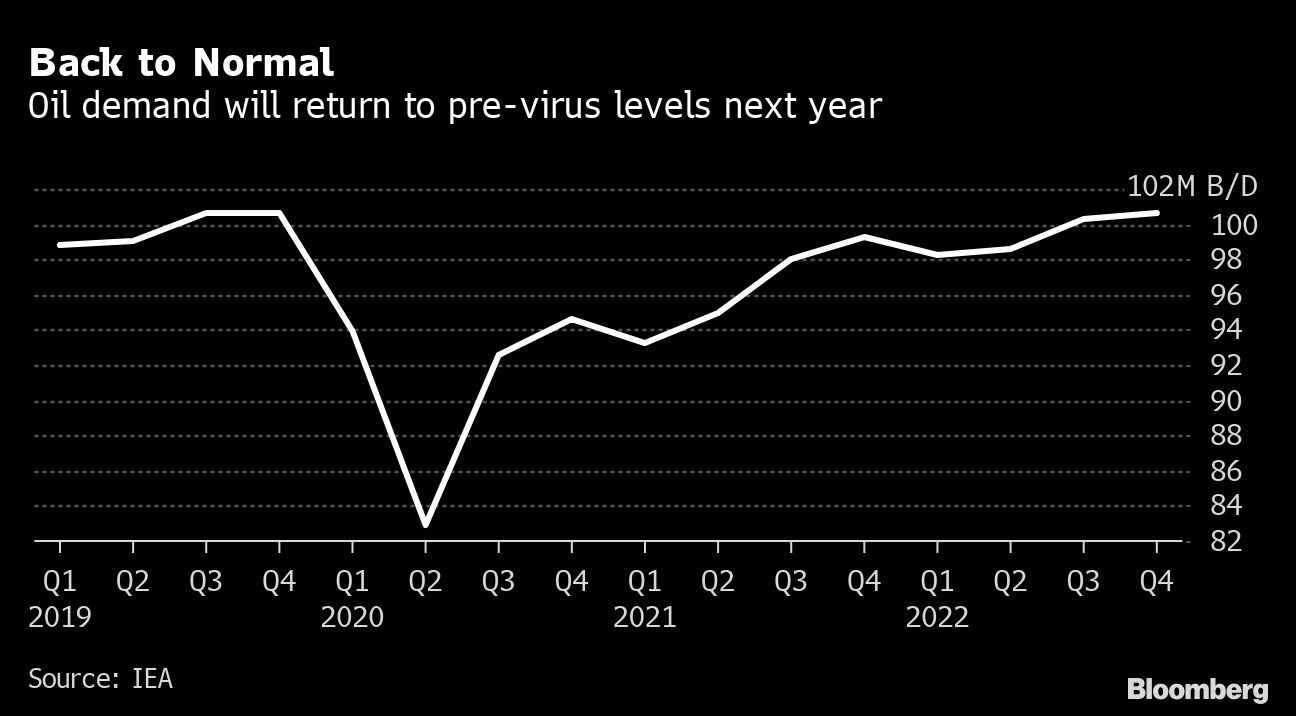 The Paris-based IEA made a direct plea to the OPEC+ alliance, which is led by those two countries, to continue restoring the output it cut when demand collapsed last year.

“OPEC+ needs to open the taps to keep the world oil markets adequately supplied,” said the agency, which advises most major economies. Satisfying demand growth is “unlikely to be a problem” if the 23-nation coalition acts because only a fifth of its spare capacity is needed to keep the market in balance, it said.

The Organization of Petroleum Exporting Countries and its partners have already achieved their primary market goal, having cleared the enormous inventory glut that amassed during the pandemic, the report showed. In April, stockpiles in developed nations fell below their average for the period 2015 to 2019, OPEC’s main metric, the report showed.

The group’s next step ought to be straightforward, according to the IEA.

OPEC+ will need to add about 1.4 million barrels a day -- or less if fellow member Iran clinches a deal to remove U.S. sanctions -- leaving it with another 5.5 million a day off-line, according to IEA estimates. Bloomberg calculations suggest the buffer isn’t quite as generous.

Tehran could add 1.4 million barrels of exports if it concludes a nuclear agreement with Washington that removes U.S. barriers on its oil trade, the IEA estimates -- equivalent to the amount the entire OPEC+ coalition needs to add. The group will meet on July 1 to consider its next move.

The alliance has, perhaps unintentionally, made its job easier. By making massive production cuts last year and supporting prices, the group has encouraged investment by U.S. shale drillers and other rivals, the report showed.

Non-OPEC+ supply will rebound by 1.6 million barrels a day in 2022, satisfying half of the anticipated 3.1 million-barrel jump in demand. Demand for OPEC’s crude will be slightly lower by the end of next year than the fourth quarter of this year, at just under 29 million barrels a day.

Even if OPEC+ did ramp up output enough to meet the increase in demand, its production in 2022 would remain a substantial 2 million barrels a day below 2019 levels.

While demand for gasoline and diesel fuels will jump next year, it will still be about 1 per cent short of pre-Covid levels due to the growth of remote working and popularity of electric vehicles, the IEA said. Purchases of jet fuel will also surge, yet remain 11 per cent below prior levels because of limits on air travel.

And with countries outside the developed world still battered by new waves of the virus, the recovery may also prove patchy on a regional basis.

“While the end of the pandemic is in sight in advanced economies, slow vaccine distribution could still jeopardize the recovery in non-OECD countries,” the IEA said.