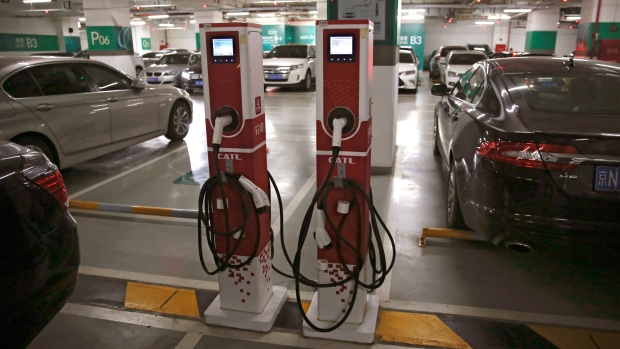 Gasoline vehicles are parked around the charging pole for electric vehicles at a shopping mall in Beijing, Monday, Sept. 11, 2017. , The Canadian Press

LONDON  - Global oil demand will fall only modestly alongside the expected rise in electric vehicles over the next two decades, with consumption in petrochemicals and other transportation still growing, the International Energy Agency said on Tuesday.

In its World Energy Outlook 2018, the Paris-based IEA said it had cut its longer-term oil price projections from last year, partly because of the falling cost of both renewable and conventional sources of energy, the worldwide push to tackle climate change and improve air quality and the boom in U.S. shale oil and gas output.

Under the IEA's "New Policies Scenario", based on existing legislation and announced policy intentions relative to emissions and climate change, the oil price should continue to rise towards $83 a barrel by the mid-2020s.

The oil market should be able to find a longer-term equilibirum, with the oil price in a range of US$50-70 a barrel, the agency said.

The IEA estimates that there will be 50 million electric vehicles on the road by 2025 and 300 million by 2040, from closer to 2 million now. However, this is expected to cut only 2.5 million barrels per day (bpd), or about 2 per cent, off global oil demand by that time.

"It's quite spectacular, because you're going to see the number of cars on the road (globally) double from 1 billion to 2 billion, thanks to electric vehicles and fuel economy standards," said Laura Cozzi, head of the Energy Demand Outlook division.

"Many commentators say we are writing the obituary for oil demand ... it is certainly true in the passenger car segment and in power generation, but it is not true in the other two elements of oil demand: transportation and petrochemicals." 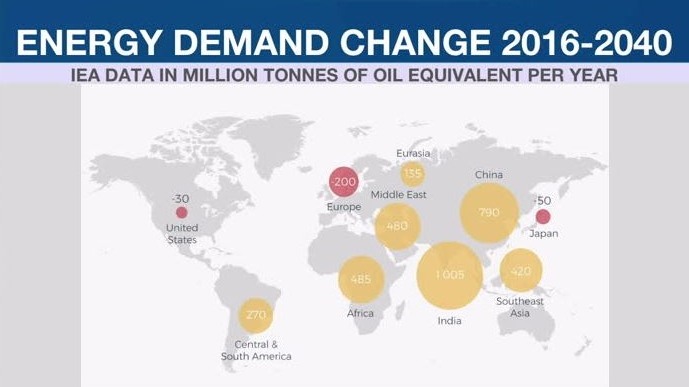 Power generation will move increasingly away from relying on coal and crude oil, with renewables taking a much larger proportion of the global energy mix.

Between 2017 and 2040 the IEA estimates that more solar power capacity will be added globally each year than any other source of energy, with an annual average increase of nearly 70 gigawatts.

"These changes brighten the prospects for affordable, sustainable energy and require a reappraisal of approaches to energy security," the agency said.

"There are many possible pathways ahead and many potential pitfalls if governments or industry misread the signs of change."

The largest disruptive force on the supply front will be the United States, the IEA said.

The United States will look set to establish itself as the "undisputed leader" in crude and gas production by 2040 thanks to surging growth in shale oil, which has proved more resilient to the low-price environment than most market observers expected, the IEA said.

"We are now witnessing a period of expansion in U.S. oil and gas production that matches or exceeds any historical records ever achieved by the oil and gas industry," said Tim Gould, head of the Energy Supply Outlook division.

The IEA estimates that U.S. crude oil is expected to rise until reaching a peak in the 2020s of about 17 million bpd.

Which sector offers the best long-term outlook as a play on energy demand?