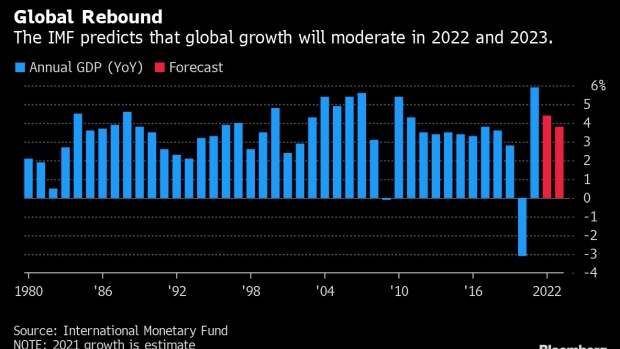 (Bloomberg) -- Investors are betting on the fastest pace of interest-rate hikes since 2010 across the world’s biggest developed markets, pressuring policy makers who want to slow inflation without crash landing their economies.

That’s the backdrop to this week’s meetings of central bank chiefs and finance ministers from the Group of 20 nations, who hold virtual and in-person discussions in Jakarta on Thursday and Friday, their first gathering of the year.

It’s a remarkable turnaround from when they last met in October, a period when Federal Reserve Chair Jerome Powell was still describing inflation as “transitory” and markets were pricing in at most two Fed rate increases this year.

Now, six Fed hikes are priced in. And across G-10 economies, swaps futures show traders expect the average central bank rate to be 1 percentage point higher in a year, the steepest projected pace of tightening since January 2010, according to Bloomberg calculations.

This pivot leaves officials struggling to manage expectations amid slowing growth, threats of war, surging oil prices and a pandemic that’s now into its third year.

“It is important that the market appreciates the nuances in the wide divergence, in not only the headline inflation rates across the various economies but the composition and the underlying contexts being so different,” said Stephen Jen, who runs Eurizon SLJ Capital, a hedge fund and advisory firm in London. “At the G-20 meeting, I think this theme will likely come through.”

San Francisco Federal Reserve President Mary Daly told CBS on Sunday that it’s paramount for the central bank to be measured and data-dependent as it starts lifting interest rates to ensure stability after U.S. inflation hit its highest since 1982.

European Central Bank President Christine Lagarde has warned that a rushed tightening would harm the euro-area’s rebound from the pandemic. The Bank of England has lifted rates twice in recent months, but Governor Andrew Bailey has cautioned the outlook is clouded by uncertainty.

In Japan, where inflation remains largely dormant, the central bank undertook an unlimited bond purchase operation in recent days to anchor yields and push back against traders testing its super easy policy mix.

And China’s central bank on Tuesday stepped up support for its slowing economy by pumping in cash via policy loans for a second straight month. Other emerging economies, including Brazil and Russia have been aggressively raising rates.

Meanwhile, some market strategists are even touting “currency wars in reverse” as governments prefer stronger exchange rates to ward off imported inflation.

Taken together, it’s clear the global policy outlook is far from uniform -- a challenge for finance ministers and central bank chiefs tasked with pulling together a communique of shared goals at this week’s meeting.

For those markets where higher rates are forecast, pricing also shows that conditions could change as borrowing costs climb. Treasury yield curves have flattened toward pre-pandemic lows, signaling investors expect rate hikes will be aggressive enough to risk souring the medium-term growth outlook.

Investors last week even started pricing in better-than-even odds that the Fed will cut rates in 2024. Bloomberg’s global bond index has dropped 3% since Dec. 31, the worst start to any year since the gauge’s 1990 start.

In February 2010, Group of Seven finance ministers and central bankers meeting in Canada agreed it was time to “look ahead to exit strategies and move to a more sustainable fiscal track,” while recognizing the need to continue stimulus. The ECB raised rates rates the next year, citing inflation pressures, only to be swamped by the eurozone crisis.

On the other hand, delaying a response to rising prices could leave officials needing to stamp down even harder later, forcing economies into recessions.

And inflation isn’t the only risk.

Tensions over Russia’s military buildup near Ukraine, with the U.S. warning an invasion may be imminent, have sent oil prices to seven year highs. The coronavirus continues to compound supply chain snags that stoked inflation.

These pressure make the G-20 agenda this week very different to the years that followed the financial crisis and the pandemic, when fears of weak growth dominated discussions.