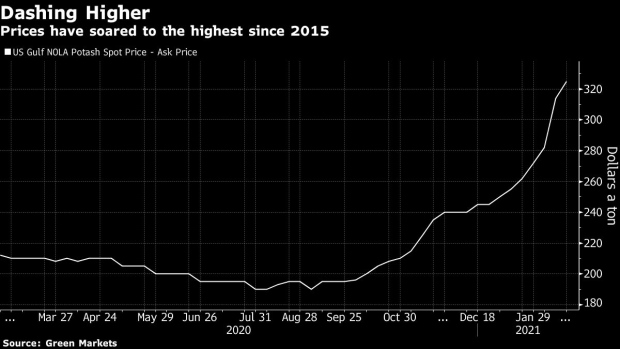 Piles of refined potash sits in a storage barn at the Nutrien Ltd. Cory potash mine in Saskatoon, Saskatchewan, Canada, on Monday, Aug. 12, 2019. Nutrien sees potash consumption though 2023 rising faster than demand for the two other main types of fertilizer and said that demand may reach 75.5 million tons a year. Photographer: James MacDonald/Bloomberg , Bloomberg

(Bloomberg) -- India’s going to be buying less potash after a run-up in prices, according to the country’s largest importer of the fertilizer, a move that may undercut expectations for global demand to hit a record this year.

Purchases in the fiscal year starting April may drop from about 5.5 million tons the year before, said P.S. Gahlaut, manging director of Indian Potash Ltd., which accounts for almost 50% of the country’s imports. He declined to give a forecast, but said demand will weaken as India still has a sizable stockpile.

“In India, consumption of potash is very price sensitive,” Gahlaut said in an interview. “Whenever prices have gone up, there’s an immediate effect on consumption.”

Potash is a nutrient that helps plants withstand drought and diseases. Prices have risen amid a surge in agricultural commodities to multi-year highs as this implies farmers will be planting more acres and using more fertilizer. Bloomberg’s Green Markets sees global potash demand at a record in 2021, while Morningstar Inc. says it will likely set a new “high watermark.”

Weaker India demand could put pressure on potash suppliers such as K+S AG, Uralkali PJSC and Canpotex Ltd. as these companies may have to lower prices for new deals. India is the fourth-biggest user of potash.

India and China recently signed potash contract deals with Belarusian Potash Co. at $247 a ton. Although that’s above 2020 prices, it caused a stir among some producers expecting even higher prices. Nutrien Ltd., the world’s biggest fertilizer company, is selling potash in the U.S. corn belt for about $350 a ton, while prices in Brazil rose $50 this year.

Stockpiles of Indian companies and traders still total more than 1 million tons, said Gahlaut. The proposed 11% cut in subsidies for imported phosphatic fertilizers and potash will further dent demand and hurt the government’s push for balanced use of fertilizers.

Gahlaut said India’s potash consumption is already lower than what is required under the policy. The country promotes balanced fertilizer use to improve crop yields, boost profitability for farmers and reduce subsidy burden. Currently there’s an excessive use of urea given the higher financial support.