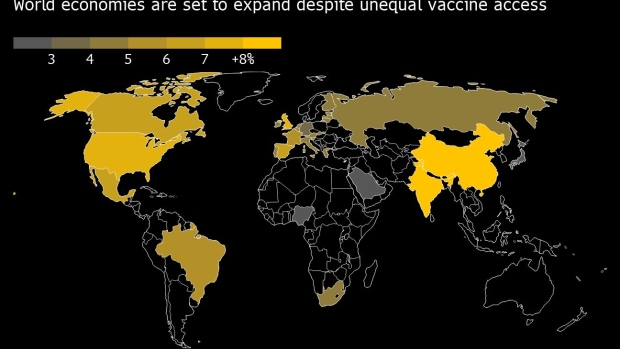 (Bloomberg) -- The International Monetary Fund maintained its outlook for the biggest rebound in global economic growth in four decades while changing underlying regional forecasts, with unequal access to vaccines further widening the recovery gap between advanced and developing economies.

World output is still expected to grow 6% in 2021 following last year’s 3.2% drop, the fund said in an updated World Economic Outlook released Tuesday. It reduced the forecast for emerging-market expansion to 6.3% compared with the 6.7% increase projected in April, and raised the estimate for advanced economies by 0.5 percentage point to 5.6%.

The U.K. got the biggest bump among major economies, with the IMF now forecasting a growth rate of 7% in 2021, a touch lower than Bank of England estimates.

“Vaccine access has emerged as the principal fault line along which the global recovery splits into two blocs: those that can look forward to further normalization of activity later this year -- almost all advanced economies -- and those that will still face resurgent infections and rising Covid death tolls,” the IMF said. “The recovery, however, is not assured even in countries where infections are currently very low so long as the virus circulates elsewhere.”

To address the widening gap, the Washington-based fund urged advanced economies -- which have inoculated about 40% of their populations -- to share their vaccine surplus with poorer nations.

“Multilateral action is needed to ensure rapid, worldwide access to vaccines, diagnostics, and therapeutics,” IMF Chief Economist Gita Gopinath said in a related blog. “This would save countless lives, prevent new variants from emerging and add trillions of dollars to global economic growth.”

In May, the fund proposed a $50 billion plan to end the pandemic, in which 40% of people in every country would be vaccinated by the end of the year. The World Health Organization, the World Bank and the World Trade Organization all endorsed the proposal.

Risks tilt to the downside, with uncertainty surrounding the global baseline remaining high, the IMF said. Delays in administering vaccines would allow new variants to spread, “with possibly higher risks of breakthrough infections among vaccinated populations.”

“Concerted, well-directed policies can make the difference between a future of durable recoveries for all economies or one with widening fault lines -- as many struggle with the health crisis while a handful see conditions normalize, albeit with the constant threat of renewed flare-ups,” the IMF said.