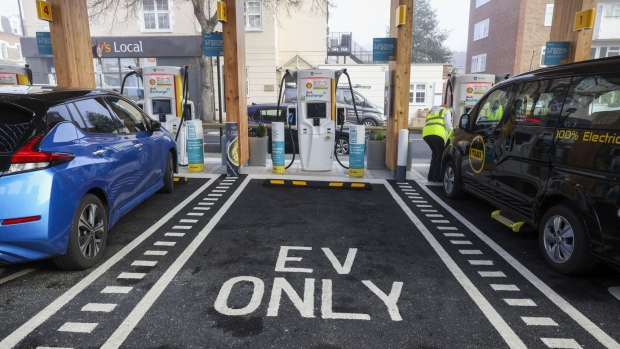 (Bloomberg) -- Mobility services including car rentals, ride hailing and bike-sharing apps are expected to generate annual revenue of $660 billion in 2030, according to a just-released study by the Oliver Wyman Forum and the Institute of Transportation studies at the University of California, Berkeley. The figure represents a nearly 40% increase from the $260 billion in revenue generated in 2020.

The services will significantly transform how people get around in cities globally, well beyond traditional public transit and privately owned cars. And with a greater focus on sustainability and alternative energy, such as battery-powered electric vehicles, the services will bring potential benefits for the climate, pollution and the livability of cities.

For example, the researchers found that “by adopting EVs at a faster rate than private car owners, new mobility services could improve air quality, reduce noise levels, and shrink the carbon footprint of cities.”

The study, which analyzed 13 services in three regions — North America, Europe and Asia — found that the new services would evolve at different speeds depending on location. Europe will overtake Asia as the fastest-growing electric vehicle market, and Asia will become a larger market for things like bike sharing and moped sharing. Currently, the Asian micromobility market is equal to that of Europe and North America combined but will become larger than the other regions through 2030, according to the report.

Improvements in technology, governmental regulations and consumer mobility demand are expected to drive most of the growth for the entire industry across all regions.

Congestion will remain a concern going forward, given the popularity of ride-sharing over public transit.  It’s too soon to know whether the services will reduce congestion over time, according to the researchers.

“While people moving to bicycles and scooters could reduce the number of cars in a city, ride hailing and car sharing may contribute to congestion if commuters choose these services over mass transit,” the report said.

Although some commuters have returned to public transit as Covid-19 fears have waned, these systems remain fragile and vulnerable, weakened from the loss of revenue. “Any long-term shift from mass transit to ride-hailing could not only deprive systems of needed financial support but also lead to congestion,” according to the report.

So cities will need to strike a balance between encouraging new solutions and bolstering mass transit systems, the researchers found. They can do this by consistently investing in infrastructure for mass transit, maintaining affordable fares and creating ecosystems that connect new services with mass transit as much as possible.

“Local authorities will have to decide how much to fund mass transit versus bike lanes or car parking,” said Andreas Nienhaus, a senior partner at Oliver Wyman in a statement. “At all levels of government, technological progress will often outpace regulation — one reason that many cities have adopted public-private partnerships as a means of collaboration.”