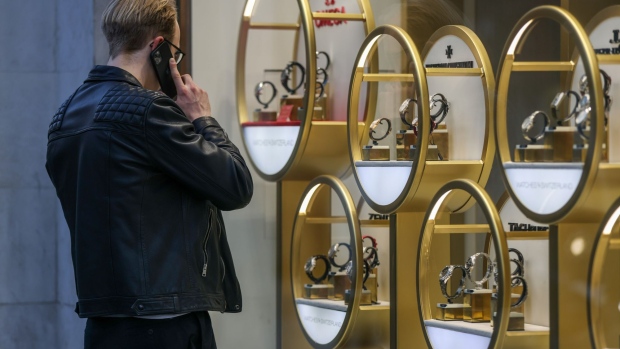 A Watches of Switzerland store on Regent Street in central London. , Bloomberg

(Bloomberg) -- The boom in demand for Rolex watches and a lack of sufficient supply is driving interest in other luxury timepieces, the head of retailer Watches of Switzerland Group Plc said.

Sales of Swiss luxury brands Rolex, Patek Philippe and Audemars Piguet showed only “modest” increases in the retailer’s 2022 fiscal year, largely because of a scarcity of the most sought-after watches, Chief Executive Officer Hugh Brian Duffy said in an interview. That drove interest in other high-end brands.

The retailer, with 171 stores in the UK and US, said demand for certain Cartier and Tudor models is now causing new supply issues.

Those supply concerns may have contributed to a decline early Wednesday in the company’s shares, which traded 1% lower at 10:49 a.m. in London after slumping as much as 4.1%. The stock has fallen by almost a third in 2022, after more than tripling over the previous two years.

Sales of luxury watches jumped during the pandemic as cash-rich consumers directed funds usually spent on travel and entertainment toward high-end timepieces. Retailers benefited with soaring sales online and in stores once they reopened.

Prices for Rolexes and some other luxury Swiss brands are starting to plateau or decline slightly on the second-hand market after a feverish rise. Despite that effect, and the hit from plunging stocks and cryptocurrencies, Duffy said retail demand for Rolex, Patek Philippe and Audemars Piguet watches continues to outstrip supply.

“Demand is just off the scale for those brands. We would love to have more of them,” he said.