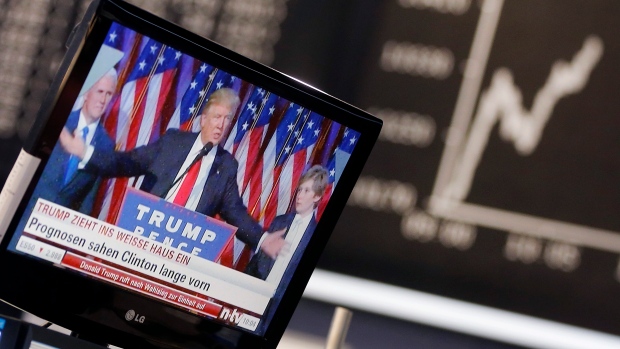 Gold, crude oil and the Toronto Stock Exchange all incurred heavy losses Friday as the markets grappled with lingering questions about what U.S. president-elect Donald Trump would do once in office.

The setbacks capped one of the wildest trading weeks in recent memory that rocked global markets in the early hours of Trump's victory, only for them to regain their footing.

"It's not as positive a day today certainly as the last few had been," said Paul Vaillancourt, an executive vice-president of private wealth at Fiera Capital in Calgary.

The markets are now dealing with the longer-term uncertainty of what policies a Trump presidency will bring in or repeal, said Vaillancourt.

Even the price of gold, normally considered a safe haven in times of trouble, was in flux as everything acted "topsy-turvy," he said.

The gold sector was the biggest drain on the Toronto Stock Exchange.

Another drag was energy, as slumping oil prices affected drillers, as well as service and production companies in Canada, said Vaillancourt.

Oil prices took a hit after a monthly report from the Organization of the Petroleum Exporting Countries said production among its 14 member countries increased last month. In October, OPEC's members produced 33.64 million barrels per day, up by 240,000 bpd.

OPEC has been working towards an agreement to cut oil production, but has been struggling with some members asking for exemptions and continuing to produce high amounts.

"The OPEC situation is such a challenge," said Vaillancourt.

WEIGH IN: Which of these decisions by Donald Trump will be most important for your investment strategy? https://t.co/IggBRTJNkt

The Bank of Canada, which publishes the exchange rates of the Canadian dollar, was closed for Remembrance Day. In international trading as of 4 p.m. ET, the loonie had lost 0.33 of a U.S. cent to 73.84 cents US.

The picture was slightly brighter on Wall Street, where the Dow Jones industrial average gained 39.78 points to set an all-time high of 18,847.66.