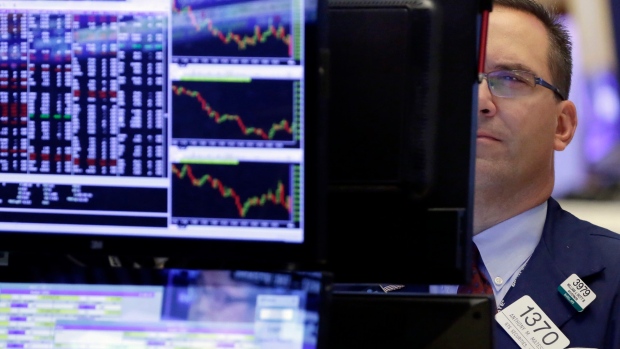 Signs that the Bank of Canada is open to the idea of an interest rate cut sent the loonie down more than a half a cent Thursday, as worries grew that the Canadian dollar will continue to face negative pressure over the short-term.

The loonie lost 0.55 of a cent to 75.63 cents US, a day after the central bank said slashing the rate is one of the options up for consideration amid a weak economic outlook.

"[The weakness] is primarily a reaction to the BoC saying that they discussed the idea of lowering interest rates," Allan Small, a senior adviser at Holliswealth, said in an email.

"I don't think anybody was or is anticipating the BoC to reduce rates and here they were speaking about it at their most recent meeting."

Small noted the loonie may face further weakness if the U.S. Federal Reserve goes ahead with an interest rate hike in December, a move which will likely boost the U.S. dollar.

On Wednesday, the bank held its trend-setting interest rate at 0.5 per cent, a level it's been at since July 2015. It said the decision was based on weak exports and a gloomy outlook for future economic growth.

The bank projects Canada's real gross domestic product will expand by just 1.1 per cent this year, down from its July projection of 1.3 per cent.

Next year, the bank is forecasting growth of two per cent, down from its previous estimate of 2.2 per cent.

In the U.S., the Labor Department said weekly applications for unemployment benefits rose last week to the highest level in five weeks, though it remained close to a recent 43-year low.

It was an encouraging sign that the U.S. job market remains resilient despite the fact that economic growth has been anemic so far this year.

In commodities, the December crude contract slipped $1.19 to US$50.63 per barrel, a day after oil prices closed at the highest level this year.

November natural gas lost three cents to US$3.14 per mmBTU, the December gold contract retracted $2.40 to US$1,267.50 per ounce, and December copper contracts faded a penny to US$2.10 a pound.

With files from The Associated Press.