Finance ministers from the world’s biggest economies endorsed a global accord overhauling how countries tax big corporations, setting it for approval by heads of state at a summit later this month.

The Group of 20 ministers’ and central bank governors’ statement of support, following a meeting in Washington on Wednesday, came five days after 136 governments reached a deal that resolved key differences over the level of a global minimum rate and an end to new digital taxes that the U.S. has deemed discriminatory.

“This agreement will establish a more stable and fairer international tax system,” the G-20 said in its communique.

The accord means that national digital taxes -- introduced by some governments including those of Italy and France -- will be removed by 2024, according to Italian Finance Minister Daniele Franco, whose country heads the G-20 this year. 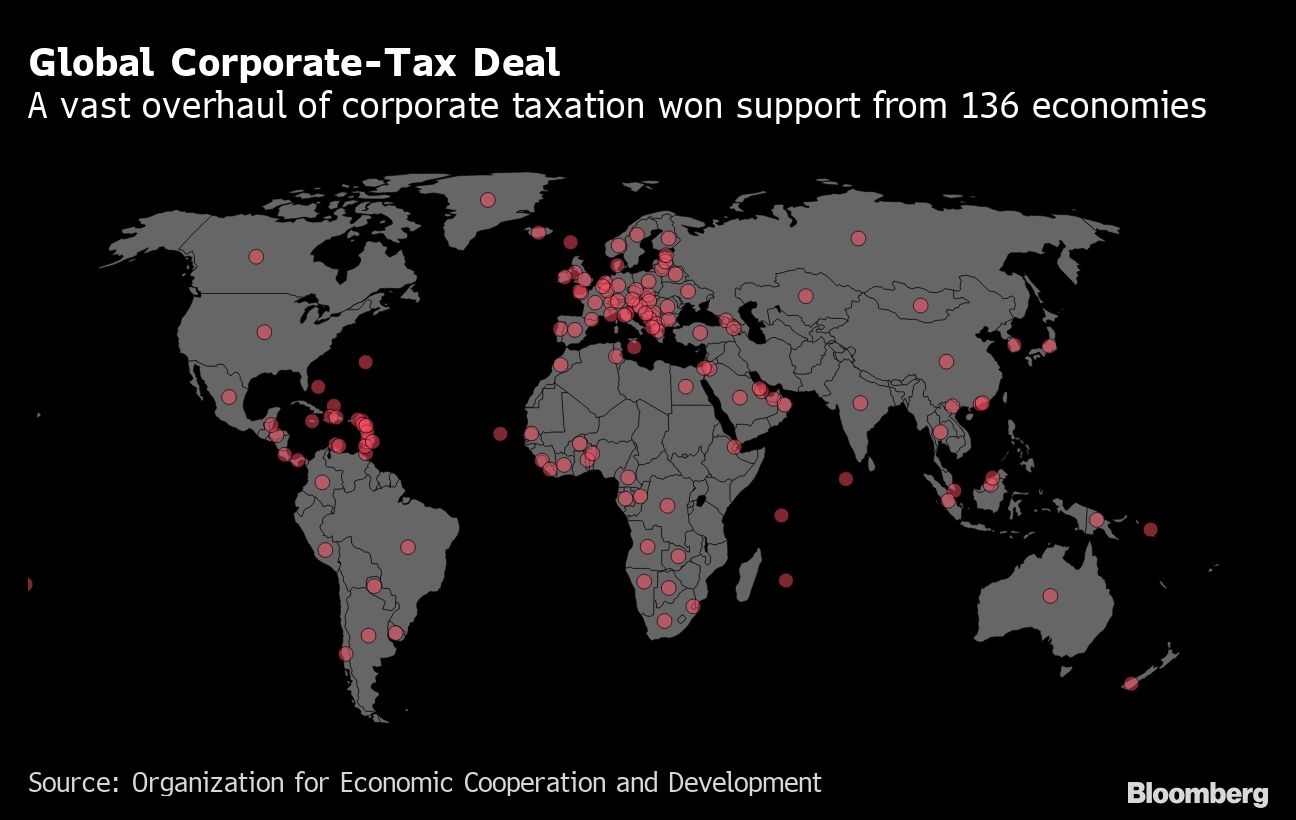 The G-20 also said in its Wednesday statement that the global economic recovery “remains highly divergent across and within countries and exposed to downside risks, in particular the possible spread of new variants of Covid-19 and uneven vaccination paces.” The nations reaffirmed that they will use “all available tools” to address the pandemic’s adverse effects.

“They will act as needed to meet their mandates, including price stability, while looking through inflation pressures where they are transitory and remaining committed to clear communication of policy stances,” the G-20 said.

German Finance Minister Olaf Scholz, who is likely to succeed Angela Merkel as chancellor, said high inflation is likely to subside and that price increases owe to pandemic disruptions, the economic recovery and higher oil and gas costs.

“All the experts tell us that in the next year we will have normalization of price inflation again,” Scholz said Wednesday in a Bloomberg Television interview in Washington.

The tax accord, which has been in the works for years, aims to end what U.S. Treasury Secretary Janet Yellen calls a global “race to the bottom” among countries luring companies with ever-lower tax rates. It also seeks to more equitably allocate tax revenue from big tech firms such as Facebook Inc. and Alphabet Inc.’s Google, after some nations imposed their own digital taxes on such companies.

The G-20-endorsed deal includes a 15 per cent minimum rate for corporations and the main parameters of how much profits of the 100 or so biggest multinationals would be taxed in more countries: 25 per cent of profits over a 10 per cent margin.

G-20 leaders are expected to approve the plans at a summit in Rome at the end of October. The Organization for Economic Cooperation and Development, which has chaired the talks, is aiming for a multilateral convention next year and implementation in 2023. Several hurdles remain, however, including ratification by the U.S. Congress.