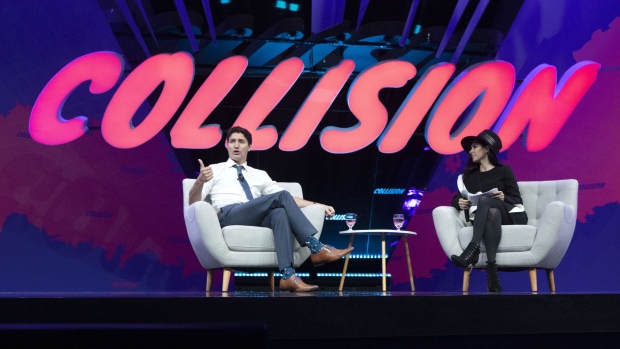 Prime Minister Justin Trudeau participates in an armchair discussion with founder and CEO of BroadbandTV Corp, Shahrfad Rafaiti, at the Collision tech conference in Toronto on Monday May 20, 2019. , THE CANADIAN PRESS/Chris Young

TORONTO -- Global technology conference Collision has cancelled plans to host its annual event in Toronto next year and instead will host the gathering online again.

Organizers sent emails to past conference attendees Wednesday saying they made the decision because of uncertainty due to pandemic.

This will be the second year the travelling conference has had to give up plans to stage the massive event in Toronto because of the health crisis.

Last year, the June conference moved completely online for the first time as COVID-19 spread across the world.

The travelling conference made its Toronto debut in 2019 and was due to remain in the city for the next two years.