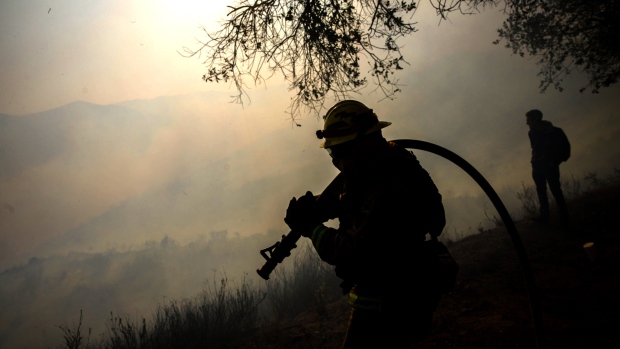 A firefighter walks through smoke from forest wildfires in California. Bloomberg/Patrick T. Fallon

The world’s average temperature is rising faster than previously thought, headed for a gain that may be triple the goal almost set by almost 200 countries.

The findings by the World Meteorologic Organization suggest an increase of 3 degrees to 5 degrees Celsius (5.4 to 9 degrees Fahrenheit) by the end of the century. It’s another indication of how far off track the planet is in meeting its target to contain global warming to 1.5 degrees Celsius since the dawn of the industrial revolution.

That was the ambition in the 2015 Paris Agreement on climate change, a level that scientists identify as one where the worst impacts on the environment could be avoided. While a fluctuation of that level hardly registers during the course of a day, when applied to the climate it would mark the biggest shift in temperatures since the last ice age ended some 10,000 years ago.

“If we wanted to reach a 1.5 degree increase we would need to bend emissions and at the moment countries haven’t been following on their Paris pledges,” WMO Secretary General Petteri Taalas told reporters in Madrid, where envoys from almost 200 countries were attending a two-week United Nations conference on the issue. 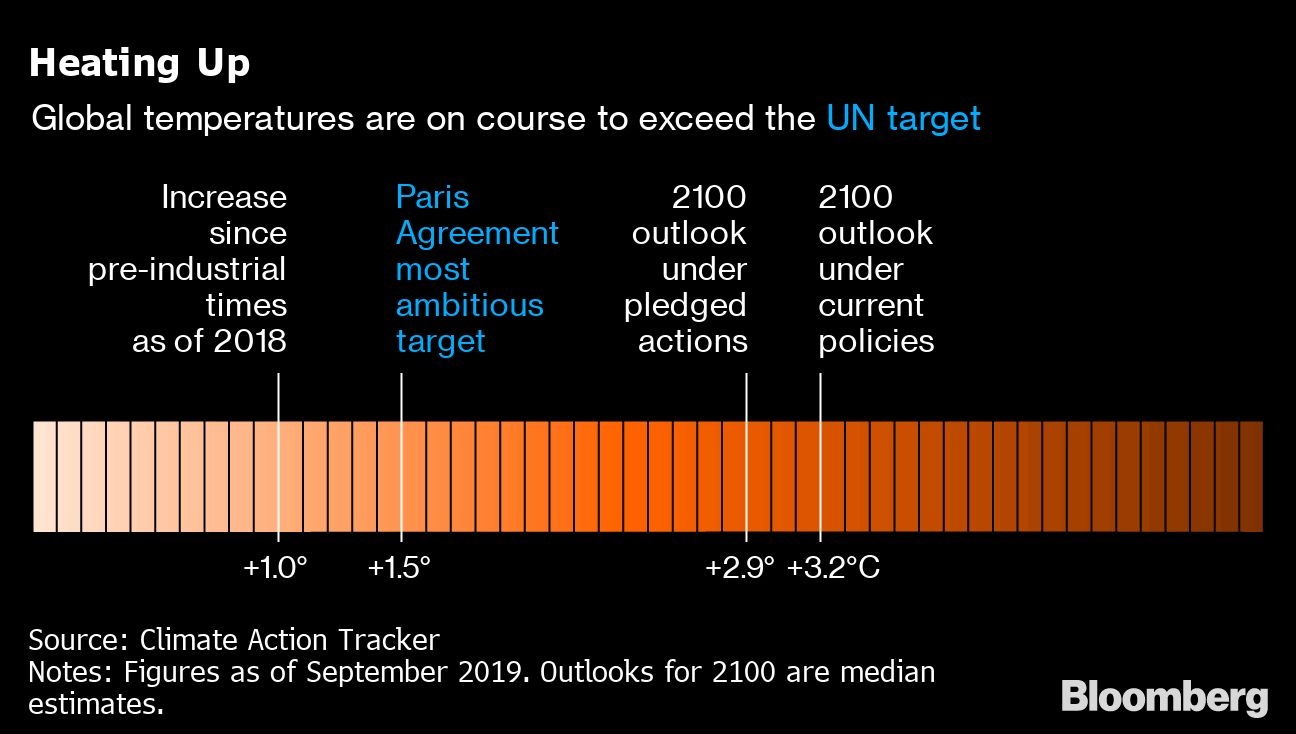 A 4-degree gain would trigger vast changes to the environment, according to research by the Pottsdam Institute for Climate Impact and Research and Climate Analytics. Some of those changes include:

• Ice vanishing from both poles.
• Many rainforests turning to desert.
• Rising sea levels flooding into the interior of continents.
• Irreversible loss of diversity among plants and animals.

The WMO report set the stage for this year’s round of climate talks hosted by the United Nations in Madrid. Rising temperatures and greenhouse gas emissions are putting pressure on governments and companies to raise their ambition for cutting back on the fossil fuels that damage the atmosphere.

Thousands of companies and financial institutions are closely watching COP25 talks this week and next for measures that would spur action. A few of the biggest made fresh promises to tackle climate change.

• In Brussels, European Union leaders are preparing to commit to cutting net emissions to zero by 2050 and to lift green investment, according to a draft of a statement due to be released Dec. 13.

• In Spain, the nation’s leading oil company, Repsol SA, became the first oil major to align with the Paris goals. It announced it would eliminate all greenhouse emissions from its operations by 2050.
• Also this week, agribusiness giant Cargill Inc. said it aims to cut 30% of emissions from its global supply chains by 2030.
• Average temperatures from January to October this year were already 1.1 degrees above the pre-industrial period, the WMO said.

The impact of global warming is being felt right now as increasingly extreme weather events hit countries across every continent -- and it has economic costs too. Damages of Hurricane Dorian, which hit the Bahamas earlier this year, are estimated at $3 billion and slashed the small island nation’s gross domestic product by 25 per cent, according to the WMO.

This year will probably be the second or third warmest year for global temperatures on record, U.K. Met Office and University of East Anglia scientists said on Tuesday. They blamed human influence as the main contributor to the warming conditions over the past 170 years.

“Each decade from the 1980s has been warmer than the previous decade,” said Colin Morice of the Met Office. “2019 will conclude the warmest decade in records that stretch back to the mid-19th century.”

Signatories to the Paris Agreement pledged to implement measures to curb greenhouse gas emissions. But there are few indications that countries have fulfilled their promises, and no signs of improvement of the state of the atmosphere, Taalas said.

Emissions show no signs of slowing either and, on the contrary, they kept rising to record levels this year. Carbon dioxide lasts in the atmosphere for centuries, and stays even longer in the ocean, locking in climate change, according to the WMO.

“The numbers on emissions are somewhat alarming,” Taalas said, adding that the world is on track for the highest greenhouse gas concentrations since the early 1980s.

The melting of ice sheets on Greenland and Antarctica is accelerating the rise of sea level, which reached its highest value ever recorded in October this year. Oceans absorb 90 per cent of additional heat in the atmosphere and they continued to heat up at near-record levels this year, from a historic record in 2018.

Fires in South America and in eastern Siberia, drought in Australia, South Africa and southern Europe, along with cold episodes in North America and melting in the Arctic have all posted multi-year records.

“Once again in 2019, weather and climate related risks hit hard,” Taalas said. “Heatwaves and floods which used to be ‘once in a century events’ are becoming more regular occurrences.”

--With assistance from Andrew Reierson and Jeremy Hodges.