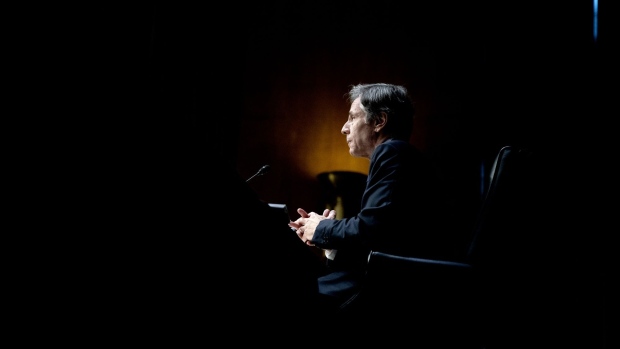 (Bloomberg) -- A Chinese state-owned newspaper has accused the U.S. of opening a “new offensive” on Taiwan, as the world’s two largest economies continue to clash over the self-ruled island.

Secretary of State Antony Blinken’s call for other countries to join the U.S. in pushing to give Taiwan a greater role at the United Nations marked an upgrade in Washington’s policy, the Global Times newspaper said in an editorial Wednesday.

In the face of such developments, China will not “step back an inch” on the Taiwan issue, the Chinese-language edition of the nationalistic tabloid said, warning that the U.S.’s call wouldn’t be heeded by most UN members.

Blinken “believes that the ‘values ​​diplomacy’ of the United States is omnipotent,” said the editorial. “He has overestimated the coercive energy of American soft power.”

The government in Beijing, which considers Taiwan part of its territory, has blocked Taiwan’s participation in UN agencies such as the World Health Organization since Taiwanese President Tsai Ing-wen was elected in 2016 and refused to accept that Taiwan is part of “one China.”

President Xi Jinping took a veiled swipe at Washington’s efforts to help Taiwan play a bigger role in international forums on Monday, saying China “resolutely opposed hegemonism and power politics” in a speech marking Beijing’s 50th anniversary as a UN member. China’s inclusion in the organization in 1971 came at the expense of Taipei, which was expelled.

“Taiwan’s exclusion undermines the important work of the UN and its related bodies, all of which stand to benefit greatly from its contributions,” Blinken said in a statement Tuesday. “The fact that Taiwan participated robustly in certain UN specialized agencies for the vast majority of the past 50 years is evidence of the value the international community places in Taiwan’s contributions.”

Blinken’s comments come after President Joe Biden said last week the U.S. was committed to defending Taiwan from a Chinese attack, in some of his strongest comments yet as the administration faces calls to clarify its stance on the democratically ruled island. A White House spokesperson later clarified that Biden wasn’t announcing a change in U.S. policy toward Taiwan, which calls for supporting the democracy’s self-defense and opposing unilateral changes in the status quo.

The Biden administration has struggled to balance the demands of those seeking greater support for Taiwan and others worried about a potential military confrontation with nuclear-armed China. After Biden in August equated the U.S.’s security commitment to Taiwan with its formal alliances with nations such as Japan and South Korea, the administration also clarified that its position was unchanged.

Despite the “tens of millions of passengers traveling annually through its airports,” Taiwan wasn’t represented at the International Civil Aviation Organization assembly, Blinken said. The same goes for the World Health Assembly, he said, where Taiwan is now absent “although we have much to learn from Taiwan’s world-class response to the COVID-19 pandemic.”

During a defense conference held Monday and Tuesday, Xi called for the establishment of a modern management system for weapons and equipment, while creating a “new situation” for their construction, according to the official Xinhua News Agency. He also praised the country’s rapid development of its weapons industry, saying China “made historic achievements in order to enhance the country’s strategic capabilities.”

(Updates with quotes from the editorial in paragraph 4 and Xi in paragraphs six and seven.)