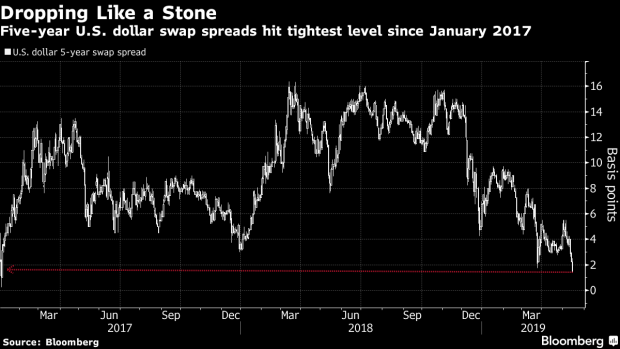 (Bloomberg) -- All roads are leading to the U.S. Treasury market as a dizzying array of global geopolitical and economic forces bolster the world’s penchant to buy America’s debt during troubled times.

Before U.S. traders could even grab a morning coffee on Wednesday, yields were tumbling across sovereign markets. Haven demand kicked in after Chinese growth figures disappointed, and intensified as tensions between Italy and the European Union rippled through euro-area assets. Then a fresh batch of subpar U.S. economic data hit, and the drop in yields took on a life of its own amid signs of mortgage-related hedging.

The benchmark 10-year yield dropped to a 1 1/2-month low of 2.36%, while its two-year counterpart spiraled to its lowest since February 2018 at 2.137%. Those levels don’t look out of line either. The darkening economic backdrop amid trade tensions and tightening financial conditions has traders boosting wagers the Federal Reserve will cut rates this year.

“We are seeing a lot of money coming into the U.S. market given the global flight-to-quality demand and our weak economic data,” said Kevin Giddis, head of fixed income at Raymond James in Memphis, Tennessee. “Even if net of currency hedging costs Treasury yields don’t look like a great buy, it’s still seen as the best bargain in the world.”

Giddis predicts the 10-year yield will fall to 2.25%, which would be its lowest since 2017. The slide is gaining speed as investors are choosing Treasuries to protect against risks in Italy and as tensions between the U.S. and Iran mount.

Demand for American debt is climbing in the face of steep hedging costs. For euro- and yen-based investors, the 10-year Treasury yield is negative after factoring in the expense of protecting against currency swings. The euro-hedged net yield is negative 0.73%.

Add up all the risks, and it’s no mystery that traders are banking on a rate cut. Futures traders now see the fed funds rate falling to about 2.07% by year-end, implying more than a quarter-point cut. Traders pared some of those rate-cut wagers and yields bounced a bit from the day’s lows after a report that U.S. President Donald Trump is poised to delay a decision to impose auto tariffs.

After Wednesday’s U.S. data, John Herrmann at MUFG Securities said Fed policy makers may be wrong in their pledge of patience on rates.

The latest figures “should serve to modify the tone of their language,” he said. “We think the Fed needs to do a preemptive rate cut in the fourth quarter or even possibly the third.”

But beyond all the global threats, the interplay between mortgages and Treasuries is also key. As yields drop, mortgage investors need to hedge, intensifying the move. Signs of that were seen Wednesday as Treasury yield declines were outpaced by a drop in interest-rate swap rates. The five-year swap spread reached the tightest level since 2017.

In March, a massive wave of convexity-related hedging accelerated a drop in yields that was already underfoot after the Fed surprised traders with a dovish tilt. That month’s dip in yields to their 2019 lows proved short-lived. The 10-year rate was back above 2.5% within a few days, cheering bond bears for a brief stretch before the latest tumble.

“The bond market is climbing the wall of worry with some Middle East tension, along with the trade developments,” said Russ Certo, managing director at Brean Capital. “Some people are taking out an extra insurance policy by allocating greater liquidity to cash, cash equivalents and the fixed income market.”

(Adds a quote in final paragraph.)