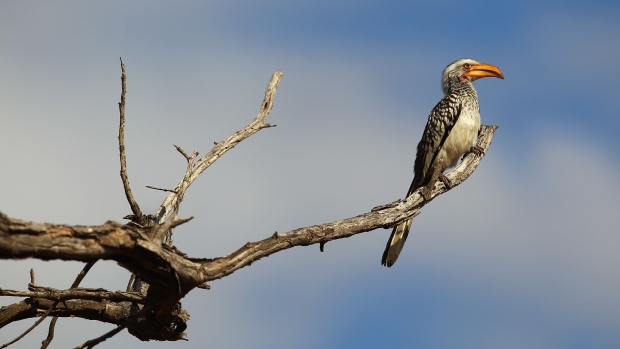 (Bloomberg) -- A sustained increase in global temperatures could see the southern yellow-billed hornbill disappear from parts of the Kalahari Desert in Southern Africa by 2027, according to a study led by the University of Cape Town.

The bird is best known for its unusual breeding and nesting habits where the female seals herself in a cavity and stays there for about 50 days to brood and care for chicks. The creature is also closely related to the red-billed hornbill, upon which the character of Zazu in the movie “The Lion King” was based.

Southern yellow-billed hornbills struggle to breed above certain temperatures as they face greater difficulty in foraging and lose weight. A comparison of two three-year periods, between 2008 and 2011 and 2016 and 2019, showed that the number of occupied nest boxes at a site in the Kuruman River Reserve in South Africa fell to 12% from 52%, the researchers said. The average number of chicks per breeding attempt declined to 0.4 from 1.1.

Meanwhile temperature data for the region going back to 1960 for the region showed no significant changes until the summer that straddled 1996 and 1997, said Nicholas Pattinson, an author of the study and a researcher at UCT. The average mean maximum daily temperature rose about 1 degree Celsius per decade from then, according to the paper.

“There is rapidly growing evidence for the negative effects of high temperatures on the behavior, physiology, breeding and survival of various bird, mammal and reptile species around the world,” Pattinson said. “Southern yellow-billed horn bills could be extirpated from the hottest parts of their range as soon as 2027.”

The study, one of the first to research the impact of rising temperatures on breeding success for a species over a longer period of time, shows that global warming heightens the risk of more extinctions and a decrease in biodiversity. Above a daily maximum temperature of 35.7 degrees Celsius (96.3 Fahrenheit), there were no successful breeding attempts among the hornbills. Based on current global warming trends, that temperature will be exceeded for the birds’ entire breeding season by 2027, the researchers said.