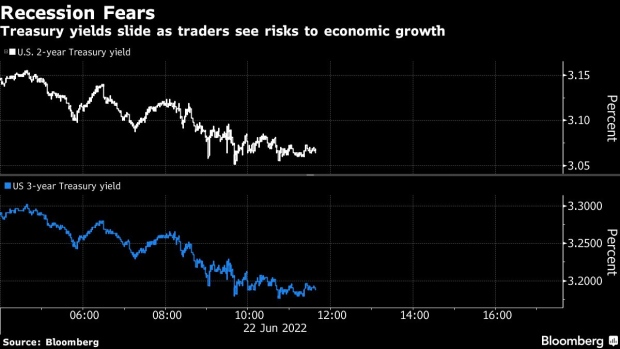 (Bloomberg) -- Australian bonds jumped Thursday to follow on from rallies in global peers as fears of a US recession send investors into government debt.

The yield on Australia’s benchmark 10-year note dropped 15 basis points to 3.84%, heading for four straight days of declines. That outpaced Wednesday’s drop in similar-dated US yields amid appeal for the haven securities that’s been burnished by the highest yields seen in years.

The gains in Treasuries overnight were led by three- to seven-year notes after Federal Reserve Chair Jerome Powell spoke about his intent to keep lifting rates until inflation is tamed. That stance added to fears already underfoot that higher borrowing costs will crimp the economy.

Economists have lowered their outlook for Australia’s economy on expectations that the Reserve Bank of Australia will follow the Fed in rapidly raising interest rates. Powell repeated Wednesday during his semiannual testimony to the Senate Banking Committee that achieving a soft landing will depend on factors outside of the Fed’s control. That helped drive eurodollar futures traders to price in a full 75-basis point Fed hike for the upcoming July meeting.

“Powell has said that he has an unconditional commitment to fighting inflation,” said Emily Roland, co-chief investment strategist at John Hancock Investment Management. “The key is how much are they willing to see economic growth deteriorate in that commitment. It’s going to be sort of a teeter totter -- this year the Fed is going to be solely focused on the price stability part of their mandate, and will probably need to take the economy right to the brink in order to slow inflation.”

US stocks are on pace for their worst first-half losses since the 1970s, which is also helping to revive Treasuries and other government debt as a haven.

The fall in Treasury rates had begun in European trading, with German bund yields spiraling. In the UK, traders are already betting recession fears will limit the amount that the Bank of England can lift borrowing costs.