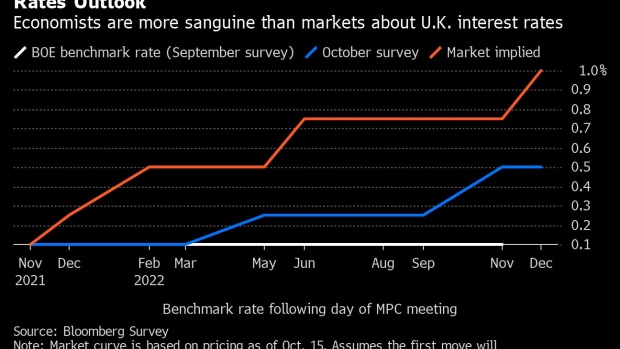 Economists are growing increasingly pessimistic about the outlook for the U.K. recovery, leaving them at odds with markets on the prospects for rapid Bank of England interest rate hikes.

The outlook for U.K. growth next year was trimmed by 0.4 percentage points to 5.1%, the sharpest reduction for any major European economy, according to a monthly survey by Bloomberg published Monday. Analysts expect no increase in the BOE’s key rate, currently at 0.1%, until May, with another hike coming in November.

While that’s more aggressive than previously forecast, the findings still mark a sharp contrast with the outlook from financial markets, where investors have loaded up on bets for tighter BOE policy in recent weeks. A flurry of hawkish comments from some officials have left traders anticipating the first post-pandemic increase from the central bank coming by the end of this year, and rates hitting 1% by December 2022.

Economists also boosted their inflation forecasts, predicting readings above the BOE’s 2% target through the first quarter of 2023. The central bank expects inflation to exceed 4% later this year and then fall back to 2.6% by the third quarter of 2022.

The GDP forecasts mean Britain’s economy would reach its pre-Covid level of output in the first quarter of 2022, three months later than previously anticipated. Unemployment is expected to peak at 5% in the first half of next year, slightly later and lower than previously thought. That indicates that most of the around 1 million people estimated to have been on furlough when government support ended last month will find work.