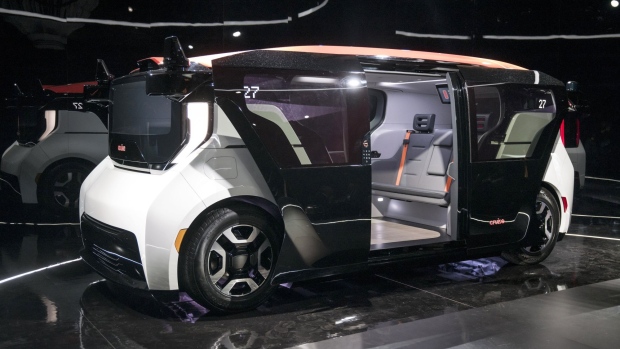 (Bloomberg) -- General Motors Co.’s self-driving car unit Cruise LLC is making some bold claims about the profit potential of its robotaxi business, saying it could grow to $50 billion in revenue and have margins in the ballpark of 40%.

Company Chief Executive Officer Dan Ammann said at GM’s investor presentation Wednesday that Cruise, which is majority owned by the automaker, should be able to get to $50 billion in sales -- which Bloomberg had reported earlier -- in about six years.

That’s how long Uber Technologies Inc. took to reap that much in bookings, according to GM. Even before Cruise gets there, Ammann said, the company could see its costs being $1 per mile. At a rate charged to customers of $2.50 a mile, it works out to a 40% margin.

“We are bringing a better product at a lower cost to a really big market and we can scale it very rapidly,” he said.

Cruise’s projected growth is a big part of GM’s push to double revenue to $280 billion by the end of the decade. GM CEO Mary Barra laid out the plan in the presentation and said the company wants to become not only a builder of automobiles, but also a provider of software-based services.

The traditional ride-hailing model run by Uber and Lyft Inc. costs the rider about $5 per mile in San Francisco, Ammann said. About $4 of that goes to the human driver and ride-hailing companies only keep a dime in profit from the remaining $1 in revenue. Uber has yet to make an annual profit -- although the San Francisco-based company said last month it may be on the cusp of doing so.

Cruise plans to run its four- to six-passenger electric-powered Origin self-driving vehicle for 1 million miles in its lifetime. Ammann said each vehicle should bring in $100,000 in revenue per year.