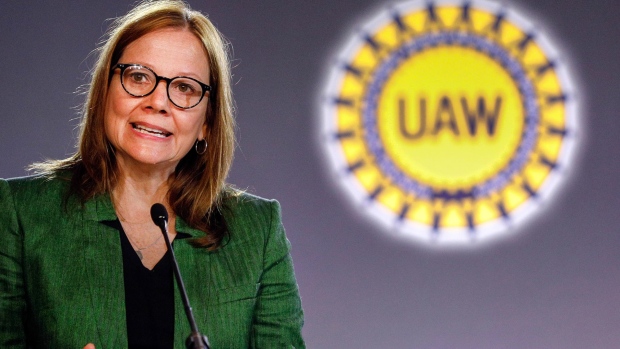 General Motors Co. Chief Executive Officer Mary Barra is meeting with United Auto Workers leaders at the main bargaining table Tuesday morning as the two sides inch closer to a tentative agreement that could end a strike now in its fifth week, people familiar with the matter said.

Barra and GM President Mark Reuss joined the talks a day after the union sent out a letter to its local leaders telling them to travel to Detroit for a meeting on Thursday. The union typically calls its local leaders in to vote on whether to take a tentative agreement to the general membership for a ratification vote.

GM shares reversed declines and rose as much as 2.3 per cent to US$36.31 on Tuesday. The stock is down about 7 per cent since the strike began.

Barra has picked her spots in terms of getting involved in the talks, having only joined the main bargaining table once before Tuesday. When talks looked like they were faltering last week, she met with UAW President Gary Jones and Vice President Terry Dittes, who leads the union’s GM department, in an effort to speed up the negotiations.

GM and the UAW moved closer to a deal over the weekend after a tense week of publicly exchanging barbs and blame for the strike dragging on. With most of the major issues settled, Barra has joined the talks to try to get a final agreement over the line, the people said.

If the two sides come to an agreement, the local union leaders will decide whether to take it to members for a vote, and if workers will return to work before or after ratification.

GM is eager to bring the strike to an end. The company has missed out on about US$2 billion of earnings as a result of the walkout, which will cost striking workers about US$2,000 of profit sharing, analysts at Bank of America Merrill Lynch estimated.

With plants across the U.S. idled and shutdowns spilling over into Mexico and Canada, the automaker is losing about US$100 million a day in earnings before interest and taxes, John Murphy, a BofA analyst who recommends buying GM shares, wrote in a research report Tuesday. UAW members have probably forgone about US$2,000 of profit-sharing and as much as US$4,000 in net take-home pay.

“A prolonged strike could burn significant cash and bring GM to its knees,” Murphy wrote. “But investors likely will also react negatively if management is perceived to have caved into labor’s demands and GM’s long-term competitiveness is threatened.”

A GM spokesman declined to comment on the BofA report. The UAW has been striking over higher wages for entry-level workers, a path to full-time employment for temporary workers and job security.