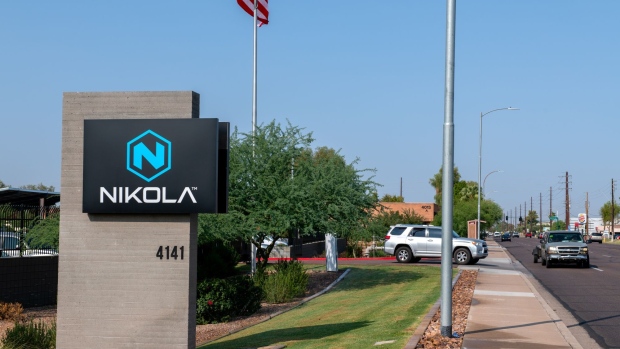 Signage is displayed outside Nikola Corp. headquarters in Phoenix, Arizona, U.S., on Tuesday, Sept. 15, 2020. Nikola Corp. shares fell as much as 10.4%, resuming its decline as investors reacted to word of a U.S. Securities and Exchange Commission investigation into allegations it deceived investors about its prospects. , Photographer: Bloomberg/Bloomberg

General Motors Co. is considering revisions to its deal with embattled Nikola Corp., according to people familiar with the discussions, and may seek a higher stake in the startup now that its valuation has fallen after allegations of deception.

GM tentatively agreed to take an 11 per cent stake in Nikola as part of a cash-free deal made public last month. The Detroit carmaker would supply hydrogen fuel-cell technology to its junior partner and manufacture a new battery-powered pickup for it called the Badger. Talks to finalize the agreement are ongoing ahead of a Dec. 3 deadline.

Since the deal was announced on Sept. 8, Nikola stock has fallen by more than half and GM has sought better terms before closing, said the people, who asked not to be identified because the discussions are private. GM could push to raise its equity in Nikola beyond the planned 11 per cent or seek warrants that would guarantee or even increase that level of ownership if the company raises more money.

GM’s due diligence on the startup has been questioned after a short seller accused Nikola of overstating its capabilities and know-how. The allegations -- and federal regulatory probes into those claims -- sent the Phoenix-based company’s stock price into a downward spiral. Nikola has denied the allegations against it and Trevor Milton, the company’s founder and former chairman.

GM’s potential interest in a larger stake in Nikola was reported earlier by CNBC.

Officials at Nikola have tried to put the controversy behind it following Milton’s resignation on Sept. 21 by embarking on a charm offensive showcasing its innovations and role as an integrator of technology from strategic partners such as Robert Bosch GmbH.

Nikola on Thursday named Steve Shindler to its board, replacing Lonnie Stalsberg. Shindler until June served as chief financial officer of VectoIQ LLC, the special purpose acquisition company that arranged for Nikola to go public through a reverse merger. VectoIQ was run by Stephen Girsky, a former GM vice chairman who helped broker the partnership between GM and Nikola and now serves as vice-chair of the startup.

The boardroom changes came one day after Nikola postponed a December event where it had planned to show the Badger pickup and other vehicles. The Badger wasn’t mentioned in a statement Wednesday outlining Nikola’s strategy and vision.