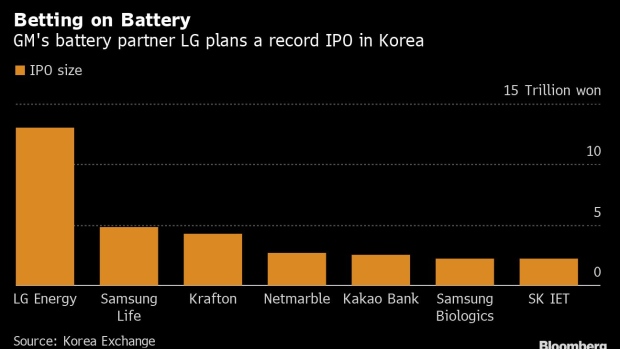 A LG Energy Solution Co. battery cell for electric vehicle (EV) at the InterBattery 2021 in Seoul, South Korea, on Wednesday, June 9, 2021. Global electric-vehicle battery sales more than doubled in the first four months of the year as the switch to environmentally-friendly cars gathers pace. , Bloomberg

(Bloomberg) -- LG Energy Solution plans to raise as much as 12.75 trillion won ($10.8 billion) in what would be South Korea’s biggest-ever initial public offering, defying concerns over fires involving its batteries that led to a mass recall of Chevrolet Bolt electric vehicles.

The company will issue 34 million new shares priced between 257,000 won and 300,000 won each, it said in a filing Tuesday. Parent LG Chem Ltd. will sell 850,000 shares, bringing the total to 42.5 million. Retail and institutional investors can subscribe on Jan. 18 and 19, according to the IPO prospectus, which said 20% will be allotted to employees. Trading will begin on Jan. 27.

The offering could give LG Energy a market value of 70 trillion won and easily top a previous Korean IPO record from 2010, when Samsung Life Insurance Co. raised $4.4 billion. LG Energy will become the third-biggest stock on the benchmark Kospi. Fellow battery makers Samsung SDI Co. and SK Innovation Co. are valued at about 48 trillion won and 19 trillion won, respectively.

LG Energy, the world’s second-largest battery maker, replaced its chief executive officer in October and set aside $918 million to cover costs related to the recall of more than 100,000 Chevrolet Bolts due to battery-fire risks.

That same month, the company signed a deal with Stellantis NV to build a cell factory in North America. LG Energy is also expected to invest in plants for cylinder-type batteries in North America or Europe, according to Rho Wooho, an analyst at Meriz Securities.

LG Energy’s IPO comes as EVs become more popular and widely accepted globally, and with the outlook brightening on more policy support and improvements in battery density and costs.

“LG seemed to try to reflect almost all of the cost related to the GM recall in the third quarter, and that means there would be probably no more cost next year,” said Changhyun Jeon, an analyst at IBK Securities.

South Korea’s Kospi is having a relatively subdued 2021, rising about 4% since the start of the year. The index was the second-best performer in the world in 2020, climbing 31%. The country’s stock market is dominated by retail traders, who have bought net $59 billion of Kospi shares this year.

(Updates with details from prospectus in second paragraph and estimated market value in third.)