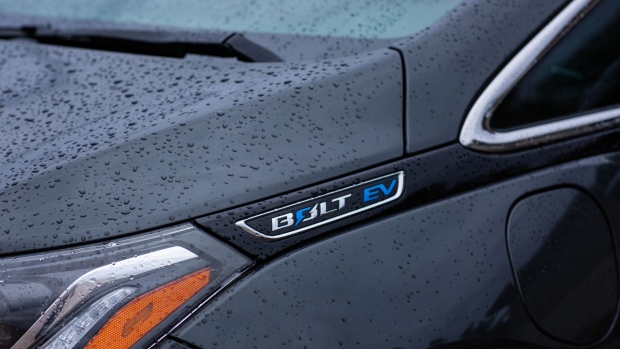 A 2017 Chevrolet Bolt electric vehicle (EV) outside a home in Gilbert, Arizona, U.S. on Tuesday, Aug. 31, 2021. General Motor Co. has recalled every Chevrolet Bolt it has built due to the risk of battery fires and warned owners not to park them in their garage--leaving owners frustrated. Photographer: Caitlin O'Hara/Bloomberg , Bloomberg

(Bloomberg) -- General Motors Co. said it would extend downtime at its Chevy Bolt electric-vehicle plant for another three weeks due to a battery pack shortage as the company recalls the vehicles over fire risks.

The company will now idle the plant through the week of Oct. 11 after earlier saying it would stop functioning through the week of Sept. 20. GM said it will continue to work with its supplier to “update manufacturing processes” and will evaluate additional production schedule adjustments.

The plant in Lake Orion, Michigan, has been idled since Aug. 23. With the recall underway, GM has urged some owners of Chevy Bolt electric cars to park the vehicles at least 50 feet away from other cars to reduce the risk that a spontaneous fire could spread.

GM also said it is cutting production at six other North American assembly plants because of the ongoing semiconductor chips shortage.