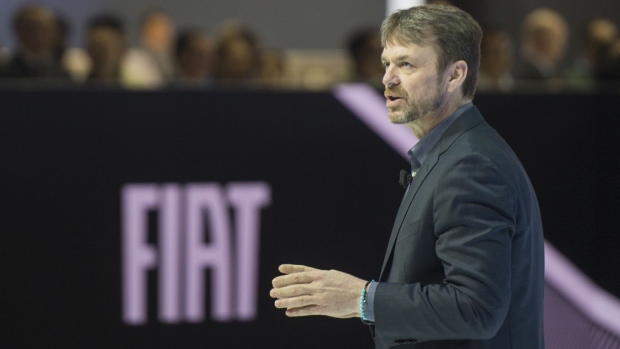 Pickup truck frames sit on the assembly line at the General Motors Co. plant in Flint, Michigan, U.S., on Tuesday, Feb. 5, 2019. GM is selling lots of expensive pickup trucks and sport utility vehicles in the U.S., which helped its average vehicle sales price hit a record $36,000. That played a big role in the better-than-expected quarterly earnings. Photographer: Jeff Kowalsky/Bloomberg , Bloomberg

The chief executives of General Motors Co. and Fiat Chrysler Automobiles NV were ordered to meet face-to-face by July 1 to resolve a lawsuit over bribery of labor union officials.

A federal judge in Detroit on Tuesday told GM’s Mary Barra and Fiat Chrysler’s Mike Manley to talk in person to try and resolve a legal claim that he called a “waste of time and resources” during the COVID pandemic.

GM filed suit last year, alleging that former CEO Sergio Marchionne, who died in 2018, and other Fiat Chrysler executives were involved in an effort to bribe union officials to get better contract terms than competing car makers. A federal corruption probe into the matter that has put nine union and Fiat Chrysler leaders in jail. GM said the added labor expenses it paid increased its costs by billions.

Both companies said they look forward to the meeting. GM, however, signaled no intention of backing down from its legal position.

“GM has a very strong RICO case and we look forward to constructive dialogue with FCA consistent with the court’s order,” spokesman Jim Cain said, referring to the Racketeer Influenced and Corrupt Organizations Act.

In its own statement, Fiat Chrysler struck a more conciliatory note.

“We also agree that FCA’s focus should continue to be -- as it always has been -- on building great vehicles,” it said, adding that it acknowledged the judge’s concerns and would “look forward to meeting to discuss them and ideally put this matter behind us.”

The judge’s impatience with the litigation came during a hearing where he grilled lawyers for GM in particular, asking at one point whether the damages the company is pursuing would decimate one of its main competitors.

“The intent is not to destroy FCA, or whatever you’re suggesting,” said Jeffrey Willian, a lawyer for the plaintiffs. “The idea is for GM to get compensated for the bribery scheme.”

GM also alleges that Fiat Chrysler’s bribes pushed union officials to go along with a proposed merger between the two automakers that Marchionne wanted but GM refused.

Fiat Chrysler Chairman John Elkann has publicly denied the allegations. The company has even said GM may have used the lawsuit to try to thwart its proposed merger with France’s Peugeot SA.

On Tuesday, U.S. District Judge Paul Borman called the litigation a “nuclear option” and said the world “has changed dramatically” since the suit was filed in November, citing the pandemic and the national turmoil over racism.

“These legalities will not only divert and consume the attention of key GM and FCA executives from their day jobs -- issues of vehicle production and sales and safety -- but also prevent them from fully providing their vision and leadership on this country’s most pressing social justice and health issues,” he said.

Addressing both sides, Borman noted that the U.S. had bailed out both GM and Chrysler following the 2008 financial crisis.

“Today our country needs and deserves that these now healthy and great companies pay us back by focusing on rescuing this country from the plagues of racism, COVID-19 and injustice while building the best vehicles in the world,” he said.