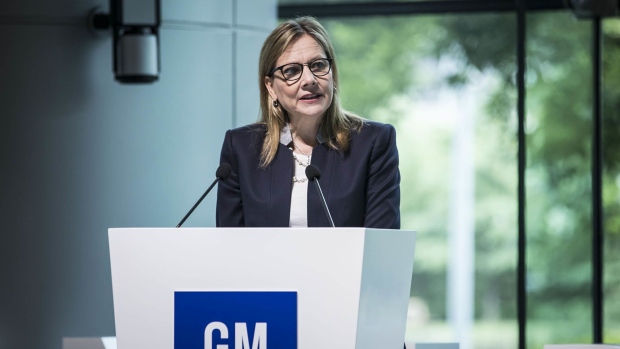 (Bloomberg) -- General Motors Co. is reinstating its dividend -- at a sharply reduced level -- and resuming share buybacks more than two years after they were suspended to preserve cash in the early days of the pandemic.

The Detroit automaker will pay a quarterly dividend of 9 cents a share beginning Sept. 15, according to a statement Friday. GM had halted its 38-cent payout in April 2020. The company is also restarting its buyback program, which will be expanded to $5 billion from the $3.3 billion remaining under the prior plan.

The decision was made in part because of momentum GM is seeing in other efforts, including electric-vehicle development and battery manufacturing, Chief Executive Officer Mary Barra said in the statement. “Progress on these key strategic initiatives has improved our visibility and strengthened confidence in our capacity to fund growth while also returning capital to shareholders.”

GM’s shareholder-pleasing effort reflects Barra’s confidence the company can fund this give-back while still being committed to spending $35 billion on more than 30 plug-in vehicles by 2025 and four EV battery plants.

The moves come amid a tough year for GM’s stock, which tumbled 34% through Thursday’s close as the semiconductor shortage upended production and pressured sales. Rival Ford Motor Co., meanwhile, has grabbed the spotlight in the electric vehicle race with the first electric pickup truck. Ford reinstated its dividend in late 2021.

Given the rout in GM shares this year, the company needed to give something to shareholders, but would have been hard pressed to go back to a peak dividend that paid out $3.1 billion annually, said Bloomberg Intelligence analyst Joel Levington. The reinstated payout comes to about $525 million.

The dividend was short of a Bloomberg forecast, which had predicted a quarterly distribution of 19 cents. By taking a more measured approach, the company can preserve cash in case the US falls into a recession and because the rollout of self-driving cars for GM’s Cruise unit will require more capital.

“They are trying to appease shareholders,” Levington said in an interview. But with additional capital needs on the horizon, “that’s not really the time to put in a heavy fixed cash payment.”

GM last month missed quarterly earnings expectations, dragging down shares even as Barra said the company would hit this year’s adjusted profit target of $6.50 to $7.50 a share. Investors see semiconductor issues as an ongoing risk, along with inflation and the risk of a recession.