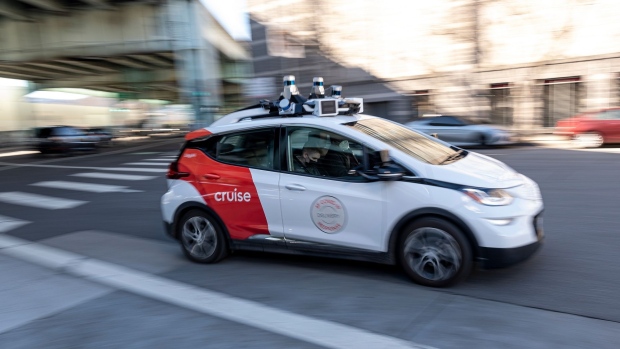 A Cruise vehicle in San Francisco, California, U.S., on Wednesday Feb. 2, 2022. Cruise LLC, the self-driving car startup that is majority owned by General Motors Co., said its offering free rides to non-employees in San Francisco for the first time, a move that triggers another $1.35 billion from investor SoftBank Vision Fund. , Bloomberg

Cruise and BrightDrop have started early-stage work that could eventually put a self-driving system into the electric vans, potentially creating a driverless package-delivery service, said the people, who asked not to be identified discussing the collaboration. The nascent project could be a logical next step for GM, whose Cruise unit has mostly been focused on getting its robotaxi business running and generating revenue.

Despite the preliminary work, the people cautioned that Cruise is still dedicating most of its resources to the robotaxi effort, and said that other self-driving vehicle programs will get additional attention once that business is established. The company has been offering free rides in San Francisco without a safety driver and is hoping for state approvals to start charging fares next month.

Representatives of Cruise and GM declined to comment. BrightDrop spokesman Daniel Roberts said via email that “there are no collaborations to announce with Cruise at this time, but we are always exploring new ways to create innovative and efficient delivery solutions for BrightDrop customers.”

Cruise’s other current priorities are development of its Origin autonomous vehicle and a delivery initiative with Walmart Inc. to bring goods from stores to customers. The Origin is a four- to six-passenger shuttle that’s purpose-built for a ride-sharing services.

Other major players in autonomous driving are experimenting with delivery services. Alphabet Inc.’s Waymo has been working to put its autonomous system in freight trucks. Argo.ai, which is owned by Ford Motor Co. and Volkswagen AG, last year announced a pilot program to deliver packages to Walmart customers in select cities.

GM has high hopes for Cruise and BrightDrop. Chief Executive Officer Mary Barra said in October that the automaker is embarking on a plan to double revenue to $280 billion by 2030. Of the projected revenue gains, Cruise is targeted for about $50 billion while BrightDrop’s electric vans would account for about $10 billion.

Putting the technologies together aligns with Barra’s vision for GM built around the slogan “zero crashes, zero emissions, zero congestion.”

Collaboration between GM and Cruise has been getting closer and is likely getting tighter after former Cruise CEO Dan Ammann was ousted in December. GM bought back shares that were owned by Japanese investor SoftBank Vision Fund, giving the automaker 80% ownership. Barra has also dismissed the notion of spinning out Cruise in the near term, ensuring the two companies will remain tightly aligned.

Cruise has been expanding routes in Phoenix for a pilot program with Walmart, which is also an investor in Cruise. In January, the retailer signed an agreement to reserve 5,000 of BrightDrop’s Zevo 600 and smaller Zevo 410 electric delivery vans to support its last-mile delivery network.

BrightDrop also has an agreement with FedEx Corp., which has reserved priority production for 2,000 electric vans over the next several years. The agreement adds to FedEx’s initial reservation of 500 BrightDrop EVs announced last year. In addition, FedEx is working on a plan to add as many as 20,000 more in the years to follow.

Travis Katz, BrightDrop’s CEO, told trade publication Freightwaves in September that his unit and Cruise could collaborate on self-driving technology with BrightDrop’s vans. No work had been done at that point, the people said.