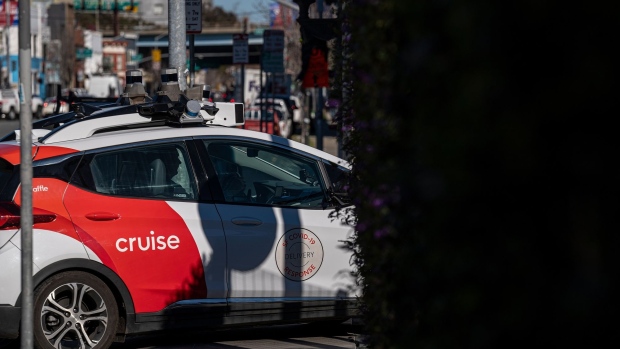 A Cruise vehicle in San Francisco, California, U.S., on Wednesday Feb. 2, 2022. Cruise LLC, the self-driving car startup that is majority owned by General Motors Co., said its offering free rides to non-employees in San Francisco for the first time, a move that triggers another $1.35 billion from investor SoftBank Vision Fund. , Bloomberg

(Bloomberg) -- General Motors Co.’s Cruise LLC plans to expand its robotaxi business to all of San Francisco this year and move into other cities beginning in 2023, a growth push that comes on the heels of its first self-driving vehicle rides to carry paying customers.

The company started charging fares Wednesday night for rides covering one-third of the city between 10 p.m. and 6 a.m.

It marked a significant milestone, both for Cruise and driverless technology. Few companies have been able to get cars on public roads without a safety driver, and even fewer are charging for it. GM’s plan is to expand the business in the next several years en route to a target of $50 billion a year in revenue by the end of the decade.

“It’s a Wright Brothers moment,” Cruise Chief Operating Officer Gil West said in an interview. “If you fast forward to next year and beyond, it’s rapid scaling of the business.”

The company aims to grow its fleet from about 100 cars currently to thousands of robotaxis in the next year or two, he said. Cruise also intends to next expand operations in San Francisco to 24 hours a day and eventually enter new cities across the state. It’s starting to run pilots in Tokyo with Honda, which owns a small stake in the company, and has announced plans to start service in Dubai next year.

Cruise will explore possibilities in the US Sun Belt, said people familiar with the matter who asked not to be identified. States like Arizona, Texas and Florida have weather that is easier for autonomous cars to drive in and a more relaxed regulatory environment.

The expansion plans come weeks after Cruise was granted permission by the California Public Utilities Commission to charge fares.

Besides Cruise, Alphabet Inc.’s Waymo is one of the few companies charging for rides, with operations in Chandler, Arizona. AV startup Motional also gets paid for trips in Las Vegas, said Sam Abuelsamid, principal research analyst with Guidehouse Insights.

Cruise aims to reach $50 billion in revenue by 2030 and challenge Uber Technologies Inc. and Lyft Inc. in the ride-hailing business. GM, which owns 80% of Cruise, believes it can be a big contributor to the automaker, helping the parent double revenue by the end of the decade.

The robotaxi company expects to make tens of thousands of dollars per car per year, West said.

The vehicles have cameras in them to alert Cruise staff if a car needs to come in for cleaning between rides. They get a deeper cleaning after running for the night, said West, who was formerly chief operating officer at Delta Air Lines Inc.

He said Cruise expects its average fare to be just under $5 a mile, which is a bit lower than Uber and Lyft charge in San Francisco. There is a $5 base fare for all rides, so longer routes have a lower per-mile cost.