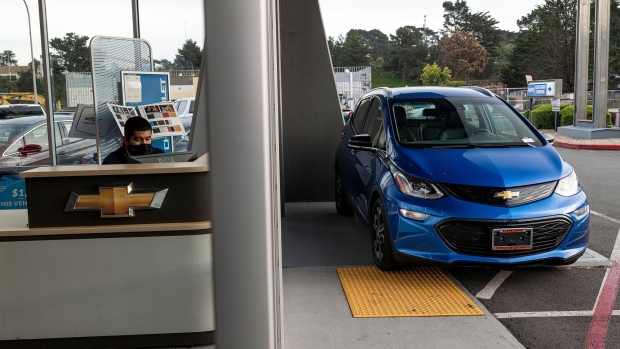 (Bloomberg) -- General Motors Co.’s plan to bring out the most electric vehicles in the U.S. over the next three years may end up ceding market share to the likes of Toyota Motor Corp. and Honda Motor Co., which are choosing to emphasize refreshing their more-profitable gasoline-burning vehicles, according to a report from Bank of America.

GM will replace only 14% of its annual sales volume with new models from 2022 to 2024, about half the rate Honda will freshen its cars. Toyota will replace its lineup at a rate of 26%, beating the industry average of 21%. Ford will replace 17% of its volume with new vehicles while pushing more EVs, according to the annual Car Wars study produced by BofA analyst John Murphy.

That’s not due to lax investment by GM. It’s because the Detroit automaker is investing more in electric vehicles in the next few years, while Honda and Toyota are spending to bolster their existing internal-combustion vehicle lineups. Because EVs sell in limited numbers, the new models GM that plans to introduce could result in lower overall market share if consumers don’t embrace the technology quickly.

GM’s replacement plan is the most stark. Murphy measures replacement rate by looking at new-model plans and forecasting volume for those vehicles. Under Chief Executive Officer Mary Barra, GM has pushed for an electric future that means developing battery-powered pickup trucks and SUVs, while conventional models wait longer for a refresh. If Barra’s bet wins, she will cede market share for a few years and then emerge as a leader around mid-decade if consumers end up embracing electric vehicles quickly.

“GM is taking an all-in bet for next three years on EVs,” Murphy said on a webcast. “One of the most amazing things about Mary Barra is her ability to take one or two steps backward to move the ball three, four or five steps forward. She’s recognizing that there may be risk in the short run for greater return in long run.”

Barra has said in investor presentations that developing electric vehicles could help GM win in coastal markets, where plug-ins sell well and GM’s brands are the weakest.

Volkswagen AG will replace 40% of its sales volume with electric models while giving few of its existing gasoline vehicles a refresh. Murphy predicts that Volkswagen and Ford will manage to keep stable market share, even with a risk of losing to Toyota and Honda. The Japanese have a crack at making sales gains and will likely have better profits, he said.

“Toyota and Honda are taking this view that they’re going to need tremendous amounts of money in the future -- like everybody does -- and believe that this transition could happen a bit later,” Murphy said. “So they will play to their strength right now to build their financial resources to fund that future transition, which they believe will happen a bit differently than GM or VW or Tesla.”