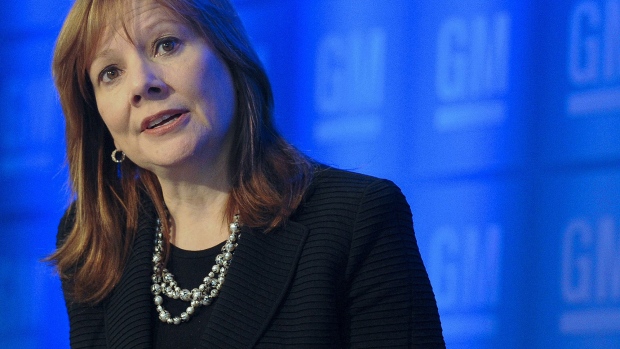 General Motors Co. and its peers have been battening down the hatches for an epic storm slamming the auto industry. But after Chief Executive Officer Mary Barra registered a bigger-than-expected first-quarter profit, some are speculating the carmaker could post positive earnings for the full year.

The results Barra reported Wednesday benefited from redesigned big pickups and her restructuring of GM that has better positioned the company for the coronavirus pandemic. After pulling the carmaker out of money-losing markets, GM has whittled down its main operations to China -- which the CEO says is seeing a V-shaped recovery -- and the U.S., where sales haven’t been as dismal as feared.

“We believe GM has a shot at potential positive” full-year earnings per share, “which would be a milestone in this crisis,” Chris McNally, an Evercore ISI analyst, said in a note to clients. GM shares rose 4.1   as of 1 p.m. Wednesday in New York.

GM’s full-size pickup deliveries soared 27 per cent in the first three months of the year, with government shutdown orders disrupting only the last couple weeks of the quarter. Strong sales of the lucrative Chevrolet Silverado and GMC Sierra trucks helped GM beat estimates for revenue and more than double analysts’ average projection for earnings per share.

Barra, 58, has suspended GM’s dividend and share-buyback program and boosted borrowing to amass US$33.4 billion of cash that should sustain the company through months of uncertainty. While GM’s executives have touted their “fortress” balance sheet for years, they haven’t been tested like this since the global financial crisis forced the carmaker into a government-backed bankruptcy in 2009.

“The company entered into this from a position of strength and the first-quarter numbers proved that,” Chief Financial Officer Dhivya Suryadevara said in a Bloomberg Television interview. “It’s the actions we have taken over the last several years. That’s one side. The other is the strength of our truck portfolio.”

GM was finally getting its footing with the redesigned Silverado and Sierra when the United Auto Workers mounted a 40-day-long labor strike that ended in October.

Freshened versions of two of the biggest money makers in the lineup were among the reasons the company was expecting a big increase in cash flow this year before the spread of Covid-19 dashed those hopes.

The viral illness lowered adjusted earnings before interest and taxes by US$1.4 billion in the first quarter. Profit excluding some items was 62 cents a share, exceeding consensus for 30 cents a share.

Revenue slipped 6.2 per cent in the first quarter to US$32.7 billion, though that topped analysts’ average estimate by almost US$1 billion.

The results were “much better than depressed buy-side expectations” and bolster “the argument to why GM’s business is in fact more resilient today,” Dan Levy, a Credit Suisse analyst with a buy rating on the stock, said in a note to clients.

GM outperformed rivals Ford Motor Co. and Fiat Chrysler Automobiles NV, which reported first-quarter losses, but all three have been in a similar boat since the coronavirus forced them to shut down North American plants in mid-March. Like Fiat Chrysler, GM is targeting May 18 for the restart of manufacturing operations in the U.S. and Canada.

The UAW signaled it’s on board with that date, though it’s still unclear whether the industry will have trouble with the patchwork of shutdown orders across various U.S. states and in Mexico.

GM is in discussions with the government and its suppliers in Mexico about getting plants in the country running in time to support its plans to restart in the U.S. and Canada, Suryadevara said on a call with reporters.

In China, where GM has ceded ground after years of being the top foreign automaker, first-quarter vehicle sales plunged 43 per cent to about 462,000, falling well behind the more than 719,000 delivered in North America.

But Suryadevara said GM is seeing “green shoots” in the market, with plants having reopened and dealers attracting more foot traffic. Conditions for the industry improved in March and April.

The CFO’s comments are in line with the view from Volkswagen AG, which is seeing demand recover as many first-time buyers look for new ways to get around while staying off buses and trains that could expose them to the coronavirus.

GM isn’t providing a detailed forward outlook because of the unpredictability of the pandemic and its affects on economies. But if global production were to drop 60 per cent to 70 per cent in the second quarter, and the annualized rate of U.S. industry sales were 8 million to 10 million, the company would expect a total cash outflow of as much as US$9 billion, the CFO said.

“We are comfortable with our liquidity position, which would take us into Q4 even if we had no production,” Suryadevara told Bloomberg TV. “So what we’re focused on now is safely restarting the plants.”