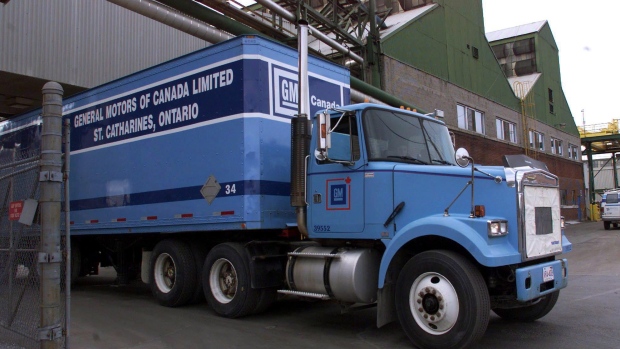 About 5,000 workers in Canada have been put on leave due to the United Auto Workers strike at General Motors Co. in the U.S., according to the union.

The Oshawa, Ontario assembly plant has been hit hardest, with all but about 100 of its 2,200 workers on leave, according to David Paterson, vice president of corporate affairs at GM Canada. That plant builds the Chevrolet Impala car and models of the Chevrolet Silverado and GMC Sierra pickup trucks.

About two-thirds of GM’s 1,100 workers at its engine plant in St. Catharines, Ontario have been laid off, Paterson said. Production at the assembly plant in Ingersoll, Ontario has not been affected, although a previously planned week-long shutdown will occur in early October.

Jerry Dias, national president for Canadian union Unifor, said thousands of workers at parts suppliers have also been laid off.

“Anybody who supplies one of those 30 assembly plants shut down in the U.S. or GM lines shut down here, the production capacity that supplies them is sitting and waiting,” said Flavio Volpe, president of the Automotive Parts Manufacturers’ Association. “I think everybody is a little bit surprised that we’re still talking about this in the second week.”

Representatives at Magna International Inc. and Linamar Corp., both of which are major suppliers to GM, didn’t immediately return requests for comment.

“We’re doing extremely well in terms of our objective which has been to keep as much production and as many people at work as possible,” Paterson said. “We’ve been a lot more resilient than a lot of people have expected.”

To contact the editors responsible for this story: Jacqueline Thorpe at jthorpe23@bloomberg.net;Debarati Roy at droy5@bloomberg.net