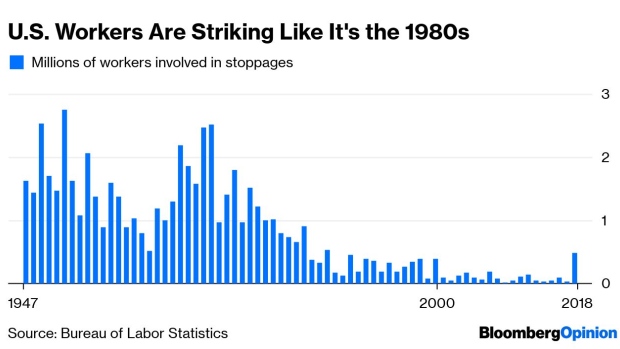 (Bloomberg Opinion) -- The United Auto Workers union has gone on strike against General Motors Co., demanding much higher pay, more benefits, more job security and a greater share of profits. One analysis suggested that the work stoppage could cost the auto manufacturer $50 million a day in lost earnings. But there might be another, bigger cost for GM and its workers if the strike drags on.

On the positive side, the GM work stoppage, the first in 12 years, has the potential to help revitalize a moribund U.S. labor movement. In recent years there has been a spate of strikes in the country, but they look small in historical context:

The iconic nature of the current struggle makes it a potent symbol. It was a 1945 UAW strike against GM that resulted in the so-called Treaty of Detroit in 1950, which resulted in the generous packages of pay and benefits that defined good manufacturing jobs in the postwar U.S. The U.S. has largely shifted to service jobs, but a UAW victory against GM could inspire service workers to organize as well. That might would be a step toward rebuilding the American middle class.

But there are several reasons why a strike against GM might not be the most effective way to kick off a reborn labor movement. The nature of the industry, the evolution of the global economy since 1950, and the pressures of climate change mean that even if the walkout ends in victory over GM’s management, the UAW strike might end up backfiring.

Internationally competitive export industries are not ideal for the kind of aggressive bargaining the UAW is engaging in. When the U.S. was practically the entire market for GM’s cars after World War II, management could accommodate labor’s demands simply by lowering profits, raising prices and increasing wages and benefits without hurting sales. But now, even if Ford joins whatever deal GM eventually reaches with its union, U.S. manufacturers are facing a global market and a slew of overseas competitors.

Today, GM isn’t even close to being the world’s biggest auto manufacturer, producing fewer than 7 million vehicles in 2018 compared to more than 10 million at Toyota and Volkswagen. In terms of worldwide revenue, Ford and GM come in fourth and fifth, respectively:

At their U.S. factories, these foreign companies generally pay workers substantially less than GM and Ford. Auto workers in Germany and South Korea earn more, but have higher productivity that more than makes up for it. Notably, German unions have often pursued a policy of wage restraint, agreeing to hold down pay increases so that their employers can gain market share. GM and Ford are thus facing an uphill battle against rivals that can produce and sell cars more cheaply.

Government policy could help shield GM and Ford from some of that competition. The U.S. could enact high tariffs to protect its markets, and it could mandate that foreign companies use unionized workers (though the latter is highly unlikely to happen unless Democrats win a lot of elections).

But even then, there would be international competition to think about. GM now sells more cars and earns more revenue in China than it does in the U.S. Overseas markets have been the main source of growth for American car companies in recent years, with no growth in U.S. vehicle sales in the past four years. And in those crucial overseas markets, GM and Ford are competing with Toyota, Volkswagen and the rest, and tariffs won’t help. Export subsidies might do some good, but other governments can match those.

The UAW’s demands could thus force U.S. automakers’ costs to levels that will render GM and Ford uncompetitive in their most important markets. That would lead to loss of market share, resulting in more plant closings and fewer jobs. When the next recession comes, a weakened GM could struggle to survive or even require a bailout like the one needed in the 2008-09 financial crisis.

The demands of the global environment may be a negative for GM as well. With anxiety over climate change rising, various presidential candidates are proposing bold plans to switch the U.S. entirely over to electric vehicles within a short space of time. That would upend GM’s core business and make many of its factories obsolete. For GM and Ford to survive in a new green-energy world, they would have to very quickly retool to make electric vehicles. Higher labor costs and pension commitments could make that retooling much more difficult.

Although the UAW strike may be inspiring for some, and may have positive consequences for the American labor movement, it may end up being a self-destructive move for GM workers themselves. The UAW should abandon the confrontational approach that worked in 1950 for the more cooperative, pragmatic strategy employed by its counterparts in Germany. It’s in the vast domestic service sector, which is less subject to foreign competition, where unions hold much more promise for wringing big concessions from management.