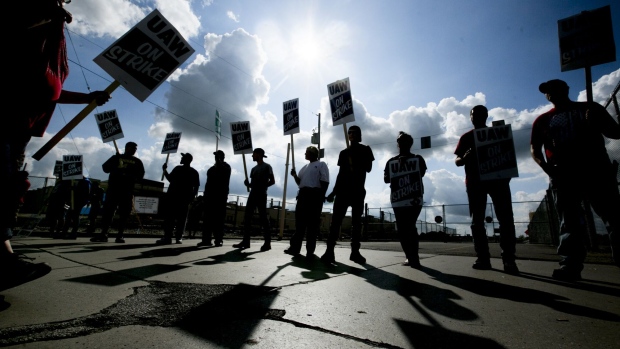 Demonstrators hold signs during a United Auto Workers strike outside the General Motors plant in Flint, Michigan on Sept. 16, 2019. , Bloomberg

The workers strike at General Motors Co., currently in its third week, may have already cost the carmaker over US$1 billion, JPMorgan analyst Ryan Brinkman wrote in a note to clients.

The analyst estimated the cost to date to be around US$1.14 billion. Brinkman said it was likely that GM will be able to recover a portion of the lost profits by shifting production from third quarter into fourth quarter. GM is estimated to be losing about US$82 million of potential profit in North America every day the strike wears on, Brinkman said.

In its second week, when virtually all of GM’s North American assembly was off-line, the strike led to the carmaker losing about US$575 million of potential profit, Brinkman said. In the first week, the losses were a little lower, at about US$480 million, given only partial shutdown of Canadian and Mexican assembly lines.

“Cash impact to bite right away at GM but likely not until fourth-quarter for suppliers,” the analyst wrote, adding that since suppliers are typically paid by automakers only after about 60 days or more, they possibly won’t feel the cash impact of the strike until the fourth quarter.

GM shares fell as much as 0.8 per cent on Tuesday in New York.