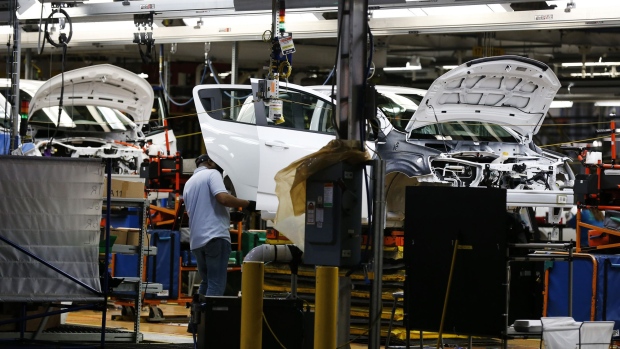 General Motors Co. is investing more than US$2 billion in six U.S. plants, including a makeover of a former Saturn plant in Tennessee into its third factory to produce electric models.

The automaker said Tuesday that it will build the first fully electric Cadillac -- the Lyriq crossover sport-utility vehicle -- in Spring Hill, Tennessee. As part of the decision, GM will move the Acadia SUV in the future to a plant in Lansing, Michigan.

The investment won’t include adding new jobs, but it is significant because it accelerates GM’s shift to battery-powered models.

It’s part of a previously announced plan to produce 20 electric vehicles globally by 2023. The company has said its Ultium battery pack will provide at least 300 miles of range, which is competitive with Tesla Inc.’s plug-in cars and SUVs.

“GM’s plans to convert idled or underutilized factories for electric-vehicle production underscore the automaker’s flexibility to move from inactive to competitor on electrification once EV profitability improves enough to warrant a committed effort. Rivals have to acquire abandoned factories (Lordstown Motors), greenfield them (Tesla, Lucid, Nikola) or pay another manufacturer to build for them (NIO) at significantly higher investment.”

GM’s plant in Lake Orion, Michigan, assembles the Chevrolet Bolt and will make a larger version of the same vehicle starting next year. The automaker said last week its factory straddling Detroit and the city of Hamtramck will make the electric GMC Hummer SUV that it will introduce on television Oct. 20.

With Spring Hill added to the mix to make the Lyriq, it also could also be in line to produce other electric models alongside the Cadillac XT5 and XT6 SUVs, GM said.

GM also said that moving the Acadia to its plant near Lansing will cost US$100 million.

Other parts of the plan include a US$32 million investment at its Flint Assembly for future production of heavy-duty Chevrolet Silverado and GMC Sierra pickups, US$17 million in changes at a factory in Romulus, Michigan, to increase capacity for 10-speed truck transmissions, which are used in full-size pickups and other key products. GM will also make US$3.5 million in upgrades at Orion Assembly.