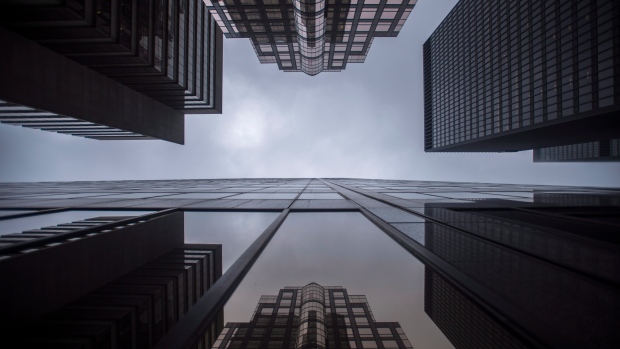 Bank buildings are photographed in Toronto's financial district on June 27, 2018. The province has appointed a taskforce to review Ontario's capital markets regulations and advise on how they can be modernized. The ministry of finance says in a statement that executives with experience at Aimia Inc., Sun Life Financial Inc., GMP Securities LP, Norton Rose Fulbright and Kingsdale Advisors will form the taskforce. , The Canadian Press/Tijana Martin

TORONTO -- GMP Capital Inc. has signed an agreement to acquire the stake in investment manager Richardson GMP Ltd. that it doesn't already own in an all-stock deal.

The company, which sold the bulk of its capital markets business to Stifel Financial Corp. in a deal worth roughly $70 million last year, said Wednesday the move is the next step in its plan to focus its business on wealth management.

"Richardson GMP has the national scale, platform and services that will afford us the greatest opportunity to create long term value for our combined shareholders," said Kish Kapoor, GMP's interim president and chief executive.

"Powered by a strong balance sheet at the combined firms and the Richardson brand, which has a rich 90-year history of success in financial services, we are well positioned for an exciting period of growth in the company for generations to come."

Richardson GMP has 162 professional advisory teams serving over 33,000 high net worth families and businesses across Canada.

The firm had approximately $29 billion of assets under administration at Dec. 31.

GMP said the companies will change their corporate names in the coming months to one more aligned with the Richardson brand and the wealth management strategy.

"We also believe that GMP's exclusive focus on wealth management will be of great benefit to Richardson GMP's highly valued clients, investment advisors, management and employees," Richardson said in a statement.

Under the agreement, GMP said it expects to issue nearly 111 million shares to shareholders of Richardson GMP.

GMP shares were down 15 cents or about eight per cent at $1.65 in trading on the Toronto Stock Exchange on Wednesday morning.

Richardson Financial Group Ltd. (RFGL), GMP's largest shareholder with a 24.1 per cent stake, will increase its ownership to 39.7 per cent following the completion of the deal.

Existing GMP shareholders, other than RFGL, will hold 30.7 per cent and Richardson GMP investment advisors will hold 29.6 per cent.