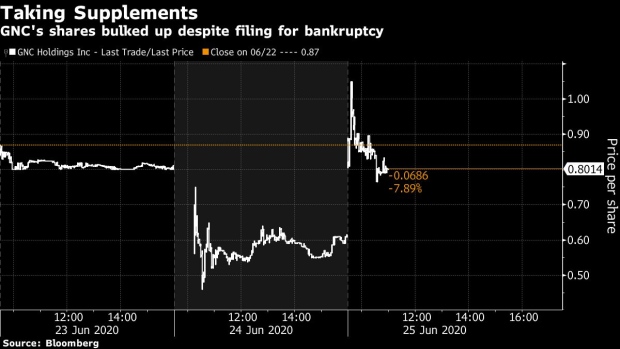 (Bloomberg) -- Here we go again. A day after filing for bankruptcy protection, shares of GNC Holdings Inc. had their biggest gain in weeks.

GNC jumped as much as 71% in New York on Thursday. That’s the biggest gain since June 8, with the beleaguered stock briefly trading for over $1 a share -- the highest in more than a week. It’s happening even though the company’s turnaround plan warns shareholders they’ll be wiped out.

The move will likely remind investors of the bizarre trading this month in Hertz Global Holdings Inc. Its stock rose almost tenfold after the car renter filed for court protection, even though there’s little or no hope that shareholders will get anything when the case wraps up.

Like Hertz, GNC is a popular stock among retail investors who use commission-free brokerages. Ownership of GNC shares in Robinhood users’ accounts has steadily increased since mid-March, according to data compiled by Robintrack.net.

Analysts have speculated that novice traders who don’t understand how bankruptcy works are driving the recent rallies in Hertz and other bankrupt companies.

Typically shareholders are the last to get a payout in a Chapter 11 bankruptcy, and that’s assuming that parties like lenders, lawyers and landlords get fully repaid.

In GNC’s case, the company has already lined up a proposed buyer with an initial bid of $760 million. GNC’s largest shareholder, China-based Harbin Pharmaceutical Group Holding Co., and other potential co-investors made this initial “stalking-horse bid” that puts a floor on the price for a court-supervised sale process.

At that price, there won’t be enough to go around for everyone. Some junior creditors and equity holders will receive “no recovery on account of such existing equity interests and subordinated claims,” GNC said in court papers.

Instead, the proceeds from a sale would go toward GNC’s secured lenders and pay off expenses such as overdue rent and bills from law firms and restructuring consultants.

To be sure, a higher bid could emerge and pass muster with the court. If there’s any money left over, the excess cash could flow to unsecured creditors, and then perhaps to shareholders.

But such outcomes are rare, and GNC’s efforts to find other buyers makes the prospect seem unlikely. The company met with 50 potential investors, according to court documents, but would-be U.S. rescue efforts were derailed by GNC’s debt load and the high cost of capital offered by lenders.