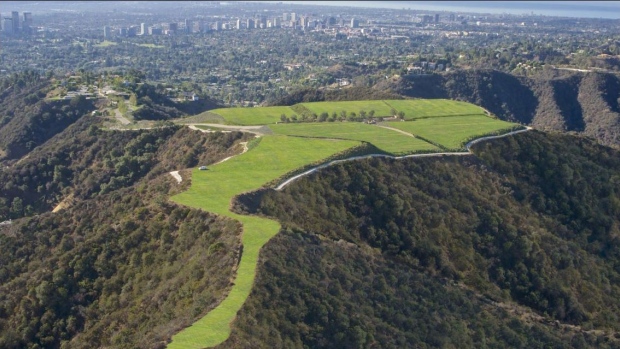 Rebranded the Mountain Beverly Hills, the property previously known as the Vineyard Beverly Hills is the highest point in the prized 90210 zip code. , Screen grab/Vineyardbeverlyhills.com

A storied and virtually undeveloped 157-acre plot of land overlooking Beverly Hills is officially coming to sale with a record-setting asking price of US$1 billion. Offering sweeping, 360-degree views ranging from the San Gabriel Mountains to Malibu, the Pacific Ocean, and downtown Los Angeles, prospective buyers will gaze down on neighbours who include Seth MacFarlane, Sylvester Stallone, and Warren Beatty.

Rebranded the Mountain Beverly Hills, the property previously known as the Vineyard Beverly Hills is the highest point in the prized 90210 zip code. It occupies a ridge in the Beverly Crest neighbourhood adjacent to Beverly Hills, with Studio City to the north and Bel Air to the west. So large is the prized piece of real estate that all of Disneyland could fit within its confines and still have 57 acres to spare. Press materials liken a visit to the site, accessed via Benedict Canyon, to a “god-like experience.”

Demand in the area is high, says Hong, whose recent sales in the environs have hit US$3,500 per square foot; the Beverly Hills average is currently at US$2,500 per square foot. The Mountain comprises six manicured, zoned lots on which the new owner can build up to 1.5 million square feet of home. Using the average price cited above, building such a structure or structures would cost almost US$4 billion, on top of the land’s asking price.

Recent additions to the market include the Chartwell Estate in Bel Air, the façade of which was used in The Beverly Hillbillies. At an asking price of US$350 million, this is currently the priciest home listed in the country; the Mountain doesn’t offer one.

Shams Pahlavi, elder sister of Iran’s last shah, Mohammad Reza Pahlavi, acquired the summit property in the late 1970s and planned to construct a single estate. Following the Iranian Revolution of 1979, which saw her brother toppled and Molotov cocktails thrown at her then-California residence by pro-Islamic Republic demonstrators, the princess let the plateau lie fallow for a decade before media mogul Merv Griffin took ownership in 1987.

Griffin had grand plans to build a massive compound on the site. Under his ownership, about 1 million cubic yards of dirt were moved from the top of the site to achieve a more level grade, and the zoning was reworked to incorporate the six buildable lots. Griffin’s interest in the project waned. In 1997, the year he took ownership of the Beverly Hilton Hotel, he sold the land to Herbalife founder and billionaire Mark Hughes.

Hughes paid US$8.5 million and planned to build a 45,000-square-foot home on the grounds. After he died in 2002, the land became part of his estate, held in trust for his then-eight-year-old son.

Hollywood royalty, including Brad Pitt and Tom Cruise, have since reportedly showed interest in all or part of the estate, which was occasionally used as an event space in recent years. But complicated lawsuits over ownership kept the property off the market until now, with the estate being offered for sale by Secured Capital Partners LLC and listed by Aaron Kirman Partners.