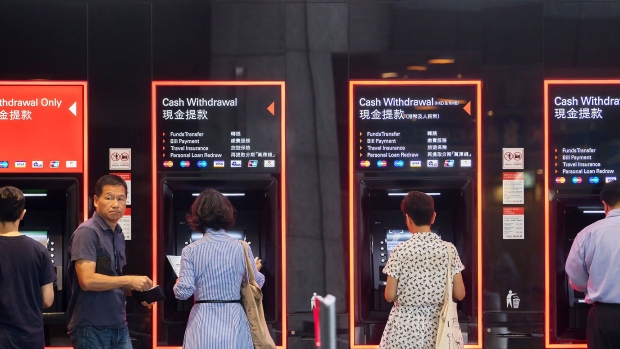 (Bloomberg Opinion) -- Last week, struggling with phone and internet banking services, I ventured out to my bank’s branch in the heart of Hong Kong’s financial district. Spread out over several floors of prime real estate, the big institution with its name sprinkled across the city was teeming with people – from two taking temperatures on entry to multiple assistants enquiring what they could help me with even before I reached the customer service counter. I got in the queue.

My turn came. The counter agent couldn’t solve my problem. His colleague had no better luck. They then brought out their “digital ambassador.” She took me to a computer and got me to call the customer hotline. When that failed, they tried to get me to fill out a paper form and wait a few days. I lost it. I demanded to see the branch manager.

Long story short, I walked out three hours later with the promise of a phone call and a resolution within the following two hours. I still couldn’t use my account, and had just spent hours — on top of the days wasted on the  hotline. I was fuming.

But I was also thinking, this just can’t be banking in 2020. Two of the agents were surely Millennials, and sympathized with my travails. There must be a better way. I’ve heard all the fuss around digital banks and fintech companies. Some are already worth a lot. Brazil’s Nubank (Nu Pagamentos SA) is valued at $10 billion, according to CBInsights, and its user base has surged 25% since the beginning of this year to 25 million. Singapore has  shortlisted banks that would only exist virtually for operations in the city-state, while Hong Kong has already awarded eight digital banking licenses.

Since my colleague Andy Mukherjee has written about this, I asked him for an update. Turns out, he’d just opened an account with one such new Hong Kong institution, WeLab Bank. What was that experience like?

Andy: It took an hour from downloading the app to getting the account operational, and only because I’m such a technology dinosaur. “Raise phone camera to eye level,” and “Blink in three seconds, two, one...” I blinked too soon.

Anjani: It’s tough to get that right, to be fair. But why did you plunge into the great unknown of virtual banking?

Andy: That’s the question I’ve been asking myself. My main bank is the same as yours, and I don’t know the first thing about the parent WeLab Holdings Ltd., a startup that raised its Series C financing in December.Anjani: Welcome to the trend. WeBank, one of the first private digital banks approved for a license by China, is now one of the largest digital banks there, with 200 million retail users. That’s more customers than traditional lenders that boast big retail bases, like China Merchants Bank Co. and Ping An Bank Co.Andy: But then, WeBank has the backing of Tencent Holdings Ltd., while I had to look up WeLab founder Simon Loong on LinkedIn. While their newness doesn’t bother me, I do want to know if they can make money.

Anjani: I get it — loss-making startups and unicorns are the norm, but a bank in the red doesn’t make me feel comfortable, either. Especially, if they’re making huge upfront investment in expensive things like certain secure technologies, more skilled people and all the promised innovation.

Andy: The cost of opening accounts for digital banks is very low, and so are operational expenses because they aren’t sitting on brick-and-mortar outlets. They can make money provided they get the deposits to build sizable and safe loan books.

Anjani: The safety issue is important. I know they’re regulated by the Hong Kong Monetary Authority just like conventional banks, and subject to stringent capital adequacy norms. The technology they use is vetted for robustness. And they need to submit exit plans, just in case things don’t work out.

Andy: That was enough for me.  It was a liberating feeling to trust at least a small sum to a bank other other HSBC Holdings Plc, Standard Chartered Plc and Bank of China (Hong Kong) Ltd. The three have a lock on deposits.

Anjani: Maybe that explains why an international financial hub offers such terrible customer service, easily the worst I’ve experienced anywhere. It’s good that HKMA is making experimentation easy by saying that digital banks shouldn’t “impose any minimum account balance requirement or low-balance fees.” For the Millennial crowd, many on first jobs and such, that’s a draw.

Andy: As a non-Millennial, I signed up because it was easy. When the app scanned my Hong Kong identification card and auto-filled nearly every field in the application, I couldn’t help but think of how the bulge-bracket bank you and I use made me visit a branch, and took all my paperwork, only to open my account in the wrong name. So much for KYC.

Anjani: I can see the advantages of going branchless. Especially when nobody, including the staff, wants to sit in an enclosed space for hours during Covid-19. But if the digital bank saves money on customer acquisition, does it share it? Are you getting a good interest rate?

Andy: I missed the inaugural 4.5% offer on Hong Kong dollar time deposits, and settled for a 0.9% annual rate that would rise to 1.1% if 50 people sign up. I was the 30th. As I used the app-generated link to invite 20 friends on WhatsApp, I understood why Sea Ltd., the maker of the popular mobile game, “Call of Duty,” is seeking a digital-only bank license in Singapore. Razer Inc., the firm behind the DeathAdder gaming mouse popular in the ESports community, also wants one.

Anjani: Maybe that is the hook — the social element. The Generation Z banking customers, the oldest of whom are now 25, are digital natives, power users of social networks. They’ll be the trendsetters of consumer credit. Many will run their own businesses. Ant Bank (Hong Kong) wants to do digital trade finance for small and medium enterprises.

Andy: Perhaps virtual banks will take us back to the future by recreating more cost-effective, better scalable versions of building societies, savings and loans associations and chit funds, hopefully with fewer blowups and scams.

So bring on “Call of Duty,” DeathAdder, WeLab and others. Let’s have real some competition for our money.