Spot gold headed for back-to-back gains as investors weighed the outlook for the metal’s record-setting rally after this week’s dramatic price swings. Silver climbed the most in more than five years.

Rising U.S. bond yields helped spark a sharp selloff in gold and silver Tuesday and early Wednesday, followed by a rebound. Both metals have resumed their uptrend as the dollar falls a second straight day. They remain among the best-performing commodities this year, aided by negative real yields and vast stimulus to combat the fallout from the pandemic.

Gold gained as much as 2.6 per cent on Thursday as concerns over the outlook for economic recovery persist and central banks and governments signal further support for their economies. Two senior Federal Reserve officials said Wednesday that the U.S. failure to control the coronavirus pandemic has undermined the nation’s economic recovery, further bolstering support for precious metals as haven assets.

“We’re not out of this crisis yet,” Jeffrey Currie, global head of commodities research at Goldman Sachs Group Inc., said by phone. “Even if a vaccine is rolled out in November it won’t be rolled out until at best the first quarter of next year, which means you still need to provide stimulus to the global economy. More stimulus means more downside risk in real rates. That’s what drives the upside in gold.” 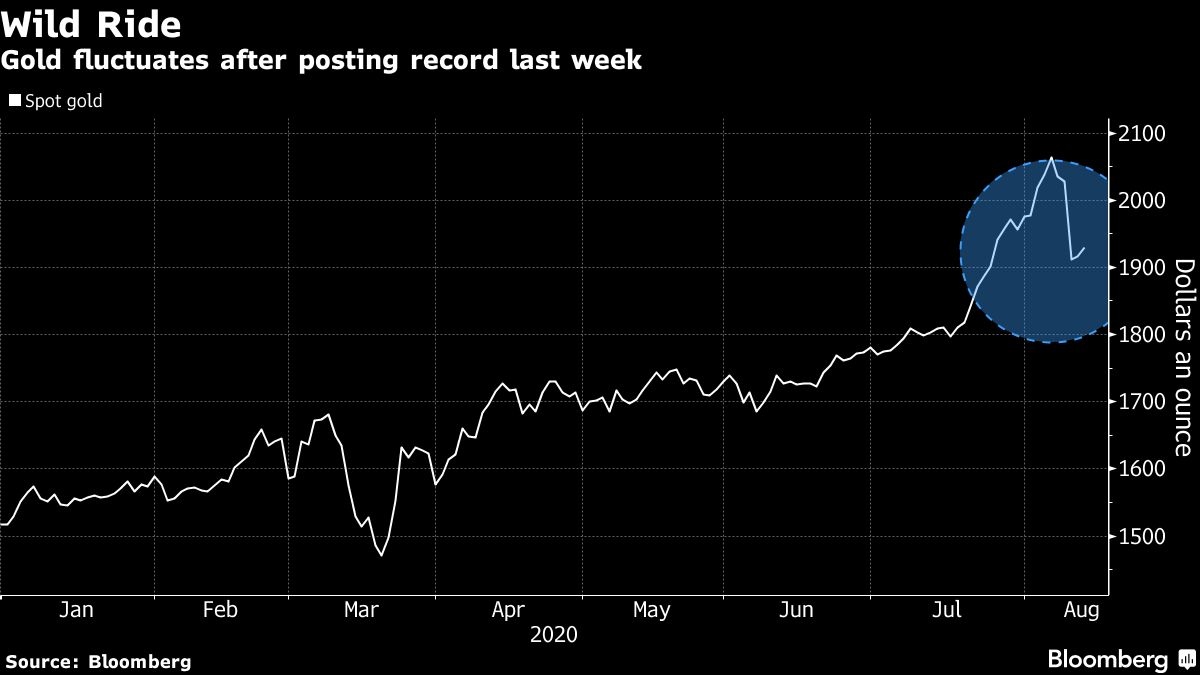 Silver for immediate delivery climbed as much as 8.7 per cent to US$27.7207 an ounce, the biggest intraday increase since December 2014. The metal rose 2.9 per cent on Wednesday and slumped 15 per cent on Tuesday.

“The dollar index broke down a bit today, but there’s a lot of people that are on the sidelines that are looking to get back in and are chasing back into gold and silver right now,” Phil Streible, chief market strategist at Blue Line Futures in Chicago, said by phone.

“We still hold a positive view on gold, targeting a retest of the level of US$2,000 an ounce by the end of this year,” said Giovanni Staunovo, an analyst at UBS Group AG. “The Fed should reiterate its dovish message and U.S. real yields and the broad U.S. dollar will likely fall further.”

The death toll from the virus continued to climb, with India’s total surpassing the U.K.’s, according to the latest data collated by Johns Hopkins University. There were signs of resilience to the economic harm wrought by the pandemic though. Australia added four times as many jobs as forecast in July, withstanding a fresh lockdown in Victoria and concerns about infection spreading.

The scope of the drop in gold prices earlier this week may limit the pace of recovery, some analysts said.

“The extent of this selloff was so severe that I think it’s caused jitteriness about longs getting back in so quickly,” Edward Meir, an analyst at ED&F Man Capital Markets in New York, said by phone. “I think the more likely scenario is we will start a consolidation range. So we might bounce around between US$1,850 and US$2,050 for the next six weeks or so. Things don’t go up forever.”