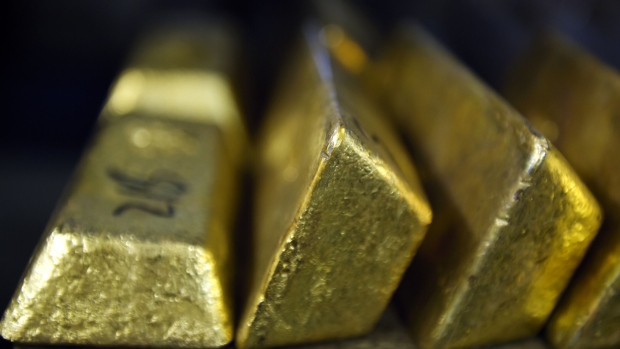 Anodes of gold sit in the vault at the Perth MInt Refinery in Perth, Western Australia, on Thursday, Aug. 9, 2018. , Carla Gottgens/Bloomberg

Trade-policy uncertainty seems to be playing a role in the global slowdown and in weak manufacturing and capital spending in the U.S., Powell said in the text of remarks Friday in Jackson Hole, Wyoming. “We will act as appropriate to sustain the expansion,” he said.

“That’s a very accommodating statement,” Bob Haberkorn, senior market strategist at RJO Futures in Chicago, said by phone. “They’re going to keep this thing going for as long as they can.”

Traders of fed funds futures extended slightly the amount of easing they expect from the U.S. central bank this year after Powell’s remarks. The outlook for lower rates, along with China’s move on tariffs, may help revive investor demand for gold, which erased a weekly loss. Lower rates are a boon for the metal, which doesn’t pay interest.