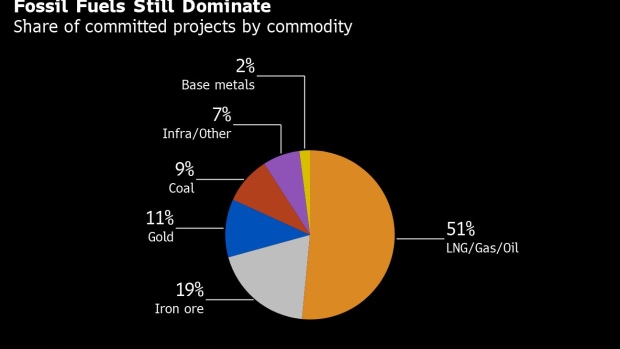 A mine worker stands at the mining face of the underground mine at the Kirkland Lake Gold Ltd. Fosterville Gold Mine in Bendigo, Victoria, Australia, on Friday, Aug. 9, 2019. As prices soar, production in the goldfields of Victoria state is rising again and has already climbed to the highest since 1914 as mining companies dig deeper and new technology helps to uncover once hidden and richer deposits in a region that almost rivaled the Californian gold rush and was thought to have petered out decades ago. , Bloomberg

The number of resources and energy projects under development in Australia rose by almost a fifth over the year to October, with mining companies still keen to unlock lucrative gold and battery minerals deposits despite the economic disruption caused by the pandemic.

There are now 335 major projects under development, an increase of 19% on the same period a year earlier, according to a list published by the Australian government on Monday, with the value of committed projects up 30% to A$39 billion ($28 billion). The value of gold and battery-related projects rose by 33% and 7% respectively, reflecting strong bullion demand and expectations of an ongoing surge in the use of electric vehicles.

The Resource and Energy Major Projects report “suggests that investment in Australia’s resources projects has entered a new growth cycle,” the Department of Industry, Science, Energy and Resources said in a media release. “It is now clear that commodity investment has turned a corner, with a new investment cycle emerging amid a surge in technological change and shifts in the global economy.”

Demand for elements used in battery technology, including lithium, nickel, cobalt and rare earths, has soared in recent years and Australia has some world-class deposits. The project list includes around 60 projects in battery commodities, valued at over A$26 billion.

Fossil fuels still account for around 60% of the investment pipeline, although sharp price falls earlier in the year for coal and liquefied natural gas, as pandemic lockdowns caused a slump in demand, has seen many projects delayed in those sectors. Financing options for coal projects are also narrowing as climate concerns increasingly cause investors to steer clear of the heavy-polluting fossil fuel.

The government forecasts a potential peak in resource project investment in 2023, before leveling off, while noting that the outlook depends heavily on the progression of 12 “mega-projects” worth over A$5 billion. There were over A$221 billion of projects at the publicly announced and feasibility stages that the department considered possible, or likely, to receive a financial investment decision, a decline from A$244 billion in the previous year.