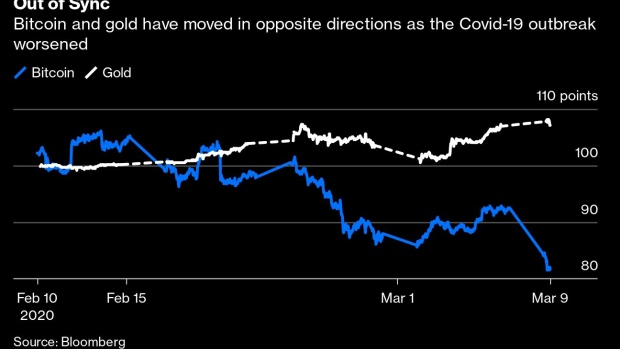 (Bloomberg Opinion) -- There was a time when Bitcoin earned its stripes as a safe asset in times of crisis or uncertainty.

Now, it seems that a global disease outbreak has proven too much for the premier cryptocurrency, with prices plunging over the past month.

Bloomberg Opinion first stumbled across the notion that Bitcoin was a sanctuary four years ago during Brexit fever, when it moved almost in lockstep with gold. We noted at the  time that it would take a few more bouts of global fear to confirm that the cryptocurrency could be considered a good hedging option.

One such occasion occurred last year, when the gold-Bitcoin two-step started up again in connection with a drop in the yuan and heightened risk over U.S.-China trade. The correlation between Bitcoin and gold over the prior year was 0.496, and had shot up to 0.827, which is about as high as you could expect. A correlation coefficient of 1 indicates that assets move in perfect lockstep.

Over the past two years this asset pair has charted a correlation of 0.616.(1)  Then the Covid-19 virus struck. For a brief moment, it looked like Bitcoin was again a winner, climbing 43% from the start of the year to as high as $10,471 on Feb. 13. That was in line with, albeit much sharper than, a rise in traditional havens gold and 10-year U.S. Treasuries.

Then it plunged. By 10 a.m. Monday in Taipei, where I am based, Bitcoin was down 23% from that high, including a 12% drop in the past day. But even without the most recent plunge, the cryptocurrency had fallen out of favor. It bobbed around $10,000 for a week or so, even as Treasuries kept climbing, and then fell under $9,500 and stayed there. Right now, it’s hovering around $8,000. Gold faced a similar sell-off, but that weakness lasted only two days before it shot up again. The precious metal is now trading at the highest level in more than seven years. As a result, the correlation between gold and Bitcoin has flipped to -0.22 over the past month.

This tells me that at least a subset of investors — those that trade cryptocurrencies — are feeling far more jittery than they did in the past. Maybe it’s because previous shocks seemed so esoteric — after all, Britain exiting the European Union and a superpower trade war were events of little direct or daily impact.

This time, though, the spread of Covid-19 has people quarantined in their homes and panic-purchasing basic necessities. That’s made the current crisis more real, more threatening, and more scary, sending investors chasing after an asset that’s more tangible than 256-bits of code and belief in a utopian digital future. (2)

I wouldn’t be so bold as to suggest that Bitcoin won’t rise again. But just one month of data is warning enough that maybe investors can’t rely on it to always be their haven in desperate times.

(1) Based on weekly data to filter out noise.

(2) A bitcoin private key, the "password" which allows an owner to transfer the asset, is 256 bits in length.