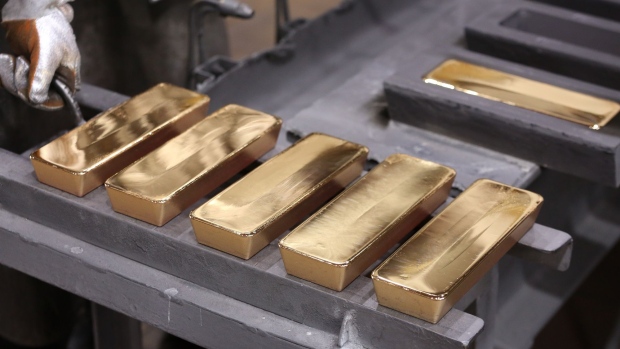 Gold futures rose above US$1,800 an ounce for the first time in eight years as low interest rates and a resurgence in coronavirus cases drive demand for the metal as a haven.

Bullion is heading for its best quarter since early 2016, benefiting from economic stimulus from the Federal Reserve and other central banks, simmering U.S.-China trade frictions and renewed concern over economic fallout from the coronavirus. Investors also continue to pile into gold-backed exchange-traded funds, with holdings at a record.

“The US$1,800 level is a psychological hurdle,” said Howie Lee, an economist at Oversea-Chinese Banking Corp. in Singapore. “Low interest rates, monetary policies and the coronavirus are all at play.”

Bullion for August delivery rose as much as 1.3 per cent to US$1,804 an ounce at 11:23 a.m. on the Comex in New York, the highest for a most-active contract since November 2011. The move extends this year’s advance to more than 18 per cent and marks a breakout from a months-long trading range.

New hot spots are emerging and the World Health Organization is warning that the worst of the pandemic is still to come because of a lack of global solidarity.

“The economy’s fate is inextricably linked to the path of the virus,” New York Fed President John Williams said Tuesday in remarks prepared for a virtual event hosted by the Institute of International Finance. “A strong economic recovery depends on effective and sustained containment of Covid-19.”

Goldman Sachs Group Inc. said gold could climb to a record US$2,000 an ounce over the next 12 months, while JPMorgan Chase & Co. recommended investors stick with bullion.

“The Fed is being extremely accommodative and because these shutdowns are starting to reoccur globally, more central bank measures are probably going to be initiated,” Phil Streible, chief market strategist at Blue Line Futures in Chicago, said by phone.