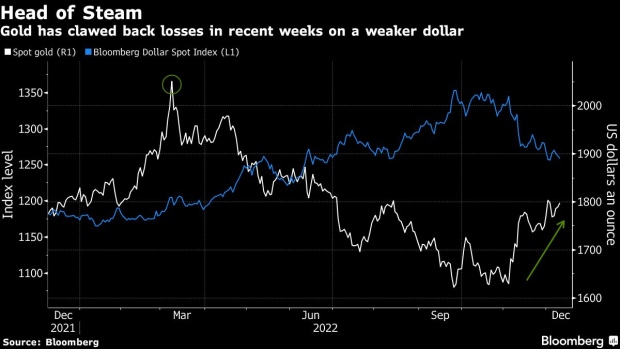 (Bloomberg) -- Gold edged higher as traders looked beyond mixed US economic data and awaited inflation data next week for clues on the pace of the Federal Reserve’s monetary tightening.

On Friday, data showed producer prices rose in November by more than forecast, driven by services and underscoring the stickiness of inflationary pressures that supports Federal Reserve interest rate increases into 2023. There are tentative signs of cooling in the labor market, with data showing Thursday that recurring applications for unemployment benefits rose to the highest level since early February.

The precious metal has risen about 10% in five weeks as the greenback sank on signs the central bank was softening its hawkish stance. The Fed has been hiking rates aggressively this year in a bid to fight inflation and cool the labor market. The consensus estimate among analysts is that next week’s data will show annual inflation rising at the slowest pace this year.

The macroeconomic backdrop is key for gold prices, said John Reade, chief market strategist at the World Gold Council. “Unless the central banks or the Fed is able to engineer a miraculous soft landing,” there’s likely to be a more favorable backdrop for the metal in the second half of next year, he added.

In the industrial metals markets, copper was little-changed to settle at $8,543 a ton on the London Metal Exchange after earlier hitting a four-month high. Most other industrial metals were lower, with aluminum falling 0.9% and nickel dropping 1%.

--With assistance from Mark Burton and Sing Yee Ong.