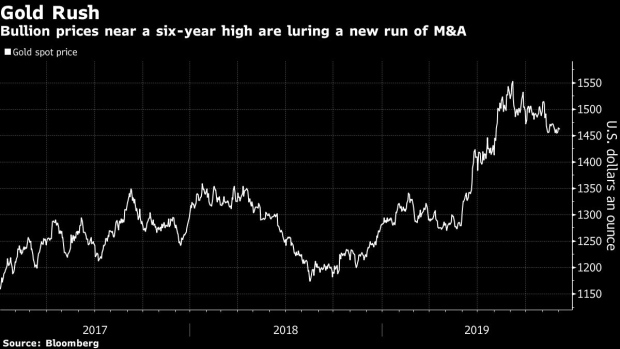 (Bloomberg) -- Endeavour Mining Corp. went public with an offer of about $1.9 billion for fellow Africa-focused gold producer Centamin Plc, after efforts to engage with the board were unsuccessful.

Endeavour’s proposal is the latest in an expanding list of gold-mining deals, with at least two acquisitions announced in about the past week. Investor anticipation for more consolidation has been building since the two largest producers shook up the industry with their own transactions last year.

This “is a bold and welcome move,” said James Bell, an analyst at RBC Capital Markets. The deal would diversify Centamin’s operations, which have faced operational setbacks and declining production, he said.

In a separate statement, Centamin said it rejected Endeavour’s offer and is better positioned to operate as a standalone company. The board advised shareholders not to take any action on the proposal.

Centamin has been touted as a takeover target ever since the size of its Sukari mine in Egypt, one of the biggest not held by a major producer, became apparent at the start of this decade. Earlier this year, Barrick Gold Corp. Chief Executive Officer Mark Bristow -- who was long seen as a suitor when he ran Africa-focused Randgold -- described it as one of the world’s top mines.

Centamin has faced operational setbacks, missed output targets and multiple political hurdles since the ouster of former Egyptian President Hosni Mubarak in 2011. In addition, CEO Andrew Pardey is preparing to retire and Chairman Josef El-Raghy was supposed to retire at the end of last year.

“The transaction would also provide a new, strong and highly credible management team for Centamin at a time when transitions in terms of both CEO and chairman are ongoing,” said RBC’s Bell. “The feedback we keep hearing from global investors is that single asset gold producers are potentially not viable long-term investments and hence may struggle to gain premium ratings.”

Endeavour is proposing to exchange 0.0846 of its own shares for each Centamin share, the company said in a statement. The deal represents a 5% premium to the 30-day average price and would result in Endeavour investors owning about 53% of the combined company. Centamin shares rose as much as 10% in London, the most since July.

Should Endeavour pursue a hostile offer, it would echo a similar move by Barrick this year for Newmont Mining Corp.

Endeavour said it wrote to Centamin’s chairman and CEO proposing an all-share merger in October 2018, but the offer was immediately rejected. After another attempt last month, Centamin refused to hold any discussions without standstill and non-disclosure agreements that would restrict the ability to canvass shareholder sentiment, Endeavour said.

This isn’t the first time Endeavour has tried to combine with another Africa-focused producer. The company ended talks for a potential deal with Acacia Mining Plc in March 2017 after failing to reach an agreement.

To contact the editors responsible for this story: Lynn Thomasson at lthomasson@bloomberg.net, Stuart Wallace, Liezel Hill